Symbol Quest and the People Inside

Wow, has this summer been busy! Between the chamber music festival, rehearsing for my shows in Baker City and fighting the devastating impact of extreme high temperatures on the garden, I’ve been in motion day and night. I’ve barely had time to launch into Symbol Quest.

Remind me again, what’s that?

It’s an activity sponsored by the City of Walla Walla, 9, that takes place at Mountain View Cemetery. Remember last fall, when you, Lily and I were planning what we hoped would be a vigorous home schooling program?

I remember. We got off to a good start on astronomy and then. . .hmmm, I don’t remember exactly why we stopped.

Too busy with other things as we often are, Lily. In addition to Astronomy, we aspired to study Spanish and learn about growing blueberries. We managed a little bit on each topic. Sadly, our two new blueberry bushes (planted in soil specially amended for the correct pH balance) have taken a lot of stress during the triple-digit heat wave. Our fourth topic was cemetery iconography.

In English: we planned to tromp around local historic cemeteries looking for symbols etched in tombstones that have special meaning. We never did make this plan fly on our own, but when I saw a poster for Symbol Quest I signed us up! We have until July 19 to locate fifteen different symbols engraved on stones in Mountain View Cemetery.

I didn’t think so, either, Lily. But then, I didn’t figure on the heat wave. 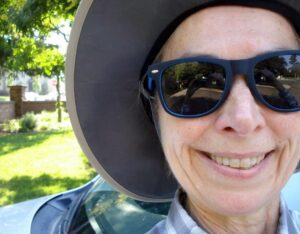 Mountain View Cemetery is a big place. It’s almost 80 acres with burials dating back to the mid-1800s. Over 40,000 people have been laid to rest there. That’s a lot of tombstones to look at. So far we’ve completed the Masonic section, explored on the mornings of July third and fourth. That leaves the Odd Fellows, Catholic and Veterans sections, plus Elks Rest (for members of that lodge) and the City Section where everyone else is. At this point we’ve covered maybe 1/8 of the total acreage. We’ve found nine of the fifteen listed items so far. 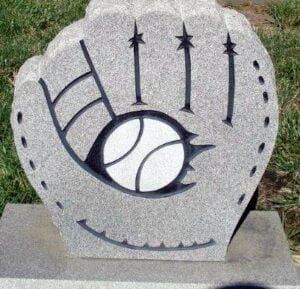 “Find baseball mitt” was not on the official Symbol Quest list but I think it’s worthy!

I agree, 9, but it’s going to be a struggle to get the rest of it done because we’re out of town the next four days. Time to block off a few morning hours next week and make our search more efficient!

Here’s the strategy I propose:

Spend some time in the Catholic Section. One of the “Symbols to Discover” questions is “How many angels can you locate?” There were only five in the entire Masonic Section, if you can believe it! During regular morning walks at Mountain View it’s easy to see that the Catholic Section is heavily populated with angels. My plan is to take one subsection of that and analyze it for angel density, then extrapolate the result for the section as a whole. Instead of a cemetery-wide count, I’ll contrast the presence of angels in these two sections in my report.

Shhhh! Everyone will know about our high math aptitude if you talk like that.

It’s okay, Lily. These days no one holds that kind of ability against actresses, or even writers. There’s a Chinese section near the Catholics, a natural for “Locate a headstone with Chinese characters.” I’ve never noticed a Greek section, but hopefully I can find a Greek surname somewhere to guide me toward “the letters HIS on a headstone,” the first three letters of the Greek spelling of Jesus.

That covers three of our missing six. I’m thinking the oldest parts of the City Section are the best places to find:

An anchor (signifies hope or a seafaring occupation)

Why the oldest parts?

Call it a hunch, 9. To me, those icons shout Victorian Era. That should take care of the required list. We might run out of time before we get to the extra credit item: “Locate one of two Medal of Honor Veterans in the cemetery.”

Of the symbols we’ve seen so far, which is your favorite?

Excellent questions, Lily. In the Masonic Section is the marker of Most Worshipful William H. Upton, a Grand Master of Washington State who died in 1906. Upton was dedicated to recognizing the Prince Hall Masons (an African-American branch of North American Freemasonry). According to https://freemasoninformation.com/2019/12/william-h-upton-memorial-ceremony/

“Upton’s sincere interest was demonstrated by a provision in his will that no monument should be erected over his grave until ‘both colored and white Masons could stand over it as brothers.’ In June 1990 the Grand Lodge of Free and Accepted Masons of Washington passed a resolution recognizing the Prince Hall Grand Lodge. On June 8, 1991 Both Grand Lodges gathered to lay a marker on William Upton’s grave.”

Here’s my photo of that monument. The color contrast is poor, but on the tombstone itself one of the hands is noticeably darker than the other. I recorded this as an example of “Find a pair of hands clasped together.” More commonly an engraving of this type would be found on the headstone of a married couple, the top hand signifying “who departed first and will later guide their loved one to the next life.” 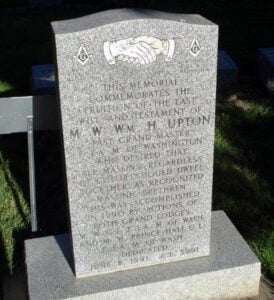 Symbol Quest. History. Meaning. Fun on a summer morning. Or two. Or four. Wish us luck!