Taking a Breath with the Person Inside 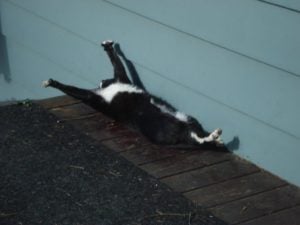 Lily, my inner fourteen-year-old, and I have spent the week at home in Walla Walla. It’s a welcome break before we take off for Reno and event number two of the Bruce Matley Memorial Trifecta. After the rush of our trip to Port Townsend, it’s been the perfect opportunity to take a breath and reset our lives to normal (whatever that is).

First and foremost is getting back into the good graces of the four-legged kids. They have a brilliant and loving sitter stay with them when I travel, but still, I was gone. Yes, I heartlessly abandoned them for the better part of six days to do human stuff. And though their sitter is brilliant and loving, I’m 99.9% certain she does not read to them at night.

I’ve been making up for this, easy to do since I’ve rediscovered the books of one of my favorite authors, Neil Gaimon. We read Stardust just before I left and were in progress on Neverwhere the day my plane flew west. Since I’m a habitual early riser and it’s become so darn dark in the morning with the change of seasons, I now do a session of reading out loud during morning coffee, as well as at night. The kids gather just like they do in the evening, drawn by a human voice and the warmth of the gas fireplace. We finished Neverwhere in just a few days and are now embarked on American Gods.

Gaiman’s writing is clean and easy to read out loud. Pronouncing the names of his Slavic triple goddess in American Gods is a challenge, but I’ve overcome their tongue-twisting appellations and they have interesting and entertaining things to say. The world he creates in this book, where gods are very human in feeling and behavior, is a lot like the world in my books Small-g City and Big-G City. Though I won’t claim I write with Gaiman’s mastery, I can’t help but wonder if this book, which I first read years ago, inspired and influenced my slightly off-kilter version of Seattle, and the creation of my behind-the-scenes City of Mount Olympus.

That’s one of the nice things about taking a breath- -there’s time for reflection. And space to think of other people. Mid-October to mid-November is filled with birthdays of friends and family. I’ve had time to purchase a stock of appropriate birthday cards and mail a quarter pound of Bright’s pumpkin fudge (made only in October) to a Scorpio friend who particularly likes it. 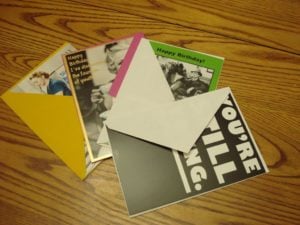 A small sample of birthday cards, purchased while I had breath to spare.

I’ve also had time to recalibrate my schedule. I have two Living History commitments between now and November 10th, and am revising a story I first started in the early 2000s that was sent out a billion times (mild exaggeration) but was never accepted for publication (which, as a more experienced writer, I now understand). Today I looked at the THEMA Literary Journal website: their “What a Strange Question!” prompt with a November 1 deadline made me think immediately of the perfect story, as yet unwritten, to send.

I thought you said we were taking a breath?

In a minute, Lily.

Back to my four-legged kids. One of the reasons I don’t travel much is I’m concerned about their health. All but one are early geriatric patients and things just- -happen. The dog needs his claws trimmed once a month. Two of the cats had six-month blood tests yesterday to assess their chronic conditions (renal failure for one, hyperthyroidism and seizures for the other). Special food needs to be stocked for the youngest cat, who is prone to getting painful crystals in his bladder if he eats anything but Science Diet c/d. If there’s anything wrong with the feral cat, he’s not saying. I’m grateful for that. 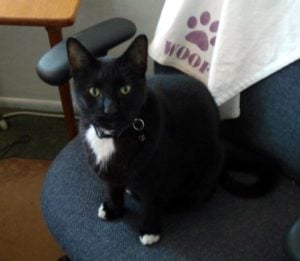 Friday “June the Sixth” Matley. His renal score is well within the normal range! Photo from 9/9/18. 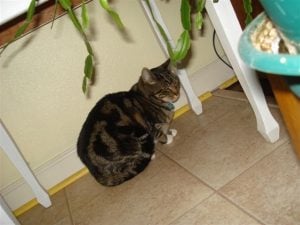 Grizelda Matley, always at her best (or at least looking so), November 2012. Thyroid score is good, seizures are under control, renal score is rising. Taking a breath and watching for the time she, too, will need subcutaneous hydration. We’ve got this!

Hey, how about paying some attention to me?

It’s been a difficult homecoming for Lily because the first thing we had to do was get over the cold we picked up on our trip. Though we bought a copy of Phillip Pullman’s long-awaited The Secret Commonwealth this week (second in his Book of Dust trilogy), I won’t let us read it until my birthday.

Get older if you want. I’m going to stay fourteen.

I’m happy about that. Because even though we’ve been very good and caring people these past several days, it’s been kind of dull around here. There have been some bright spots, just little moments like walking to the post office in downtown Walla Walla on a pleasant fall day and smiling at all the other people who were smiling because it was a pleasant fall day. We ordered a new pair of pajama pants from LL Bean (the elastic at the waist of the old ones has just about worn its way through the drawstring waistband). We had lunch in Walla Walla with a visiting Port Townsend friend last week and maybe, just maybe, we will make it to opening week of the new Maleficent movie at multiplex.

We should go to a matinee on Saturday. It’s supposed to rain half an inch that morning and afternoon. No way are you going to do yard work you’ve planned.

The first screening on Saturday is 10:30 AM. If they serve coffee at the theatre, you’re on, Lily! Because, after all, there’s more than one way to take a breath.