Teachers, Ancestors and Other Strangers 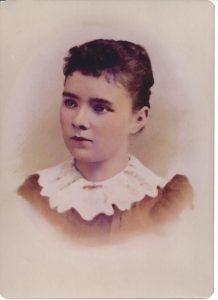 It’s the time of year when I think of back-to-school and those who wait for us there- -teachers.

In my family we have five continuous generations of teachers. Most recently, my niece has followed in her mother’s footsteps. Before my sister, our dad and an uncle taught for part of their working careers. Back another generation, two great aunts graduated from Normal School and instructed rural students before said great aunts married. But the very first teacher in our family was their mother, Mary Jane Imlay.

“Mamie” to friends and family, Mary Jane Imlay was under five feet tall. She was the eldest child of Scottish immigrants. Her father came to America to claim a farm he’d inherited from his brother, who’d died serving in the Union Army during the Civil War. Mamie was born on that Illinois farm. Her family relocated to Oregon in the 1870s and started a grain business near Hillsboro. At age 19, Mamie traveled to Chicago by train, bound for the 1893 Columbian Exposition, without a chaperone!

She was a bold one, no question. 1896 found her in Elk City, Idaho, teaching. The monthly pay was fifty dollars, princely compared to the forty per month she could earn in Oregon. Mamie boarded with local families, taught in a one room schoolhouse and tactfully dodged the advances of local bachelors (plentiful in this mining town) while borrowing their best horses. She rode long distances, alone and sometimes at night, and packed a pistol to defend herself on these excursions.

Mamie loved horses and riding. At a summer Sunday school picnic she met Claude Bontah “Bont” Patterson, a tall young Texan with a beautiful horse. They married early the following year. Mamie was then teaching in Stuart, Idaho, and regularly wrote Bont who ranched near Denver, Idaho. In a letter sent days after the wedding, she relates that one of her young students said, “I like you just as well as ever, only I intended marrying you myself when I got big.”

Why has this information survived for 120 years? Partly because Mamie lived to 103, but mostly because, after she died, one of her grandsons discovered a cache of love letters between Mamie and Bont in Mamie’s old trunk. Her grandson (my uncle who became a teacher) transcribed and compiled the letters and bound them in a collection. One of the copies is on my desk; I also have the original letters, entrusted to me by my mother. Mamie and Bont’s courtship, furtively mailed letters yellowed with time, fills an ancient cardboard candy box. Minuscule handwriting covers every inch of paper, a precious commodity in 1896 rural Idaho. Terms of endearment pepper their correspondence with growing frequency as months pass. Occasionally, jealousy rears its head. Instructions equivalent to “burn this” serve as postscripts.

It’s interesting to consider “Great Grandma Patterson” (someone I remember as a pert-tongued, take-charge woman the size of a fourth grader) as the belle of Elk City, Idaho. As an octogenarian and beyond, she grew her own vegetables, butchered her own chickens and roared with laughter when something struck her as funny. I remember listening to her stories when I was a teenager but she and I didn’t have conversations. Maybe I thought she didn’t have much to tell me. I’d read “Gone with the Wind” and was told that Mamie had read it with nary a pause when it first came out. It never occurred to me to ask her about her Scottish uncle who’d fought in the Union Army. She and Bont probably argued about the Civil War, his family having fought for the Confederacy. A true Romeo and Juliet of their time.

It’s a bit voyeuristic, reading someone’s old love letters. But it’s also an opportunity to understand that, as far as the human condition is concerned, we walk the same paths as our ancestors. Scratch the surface and you’ll find yourself in their stories.