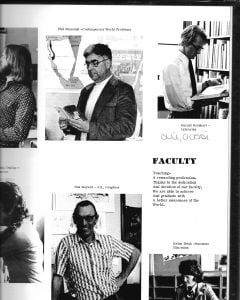 It’s “back to school” month, a time of year that, for me, pulls up memories of new school supplies and cardigan sweaters that were just right in the morning but too hot in the afternoon. In grade school it meant long hours under the guidance of a lone teacher, possibly the same one my sister had been assigned to a couple of years earlier. In seventh grade the world changed- -mandatory P. E. and math, one precious elective (mine was orchestra) and half a day with a “home room” teacher who covered history, English and social studies.

Seventh grade was when I first received encouragement for writing stories. In home room, Mr. Ed Barcott often assigned us creative writing projects, including the challenge of writing and illustrating our own cartoons (mine was a fruit bowl bad guy named Punchy Pomegranate). Mr. Barcott was an ace at recognizing and praising imagination and instilled in us a feeling that we could achieve something if we tried.

Ninth grade brought the unbelievable wealth of 2 electives. I continued to saw away on the cello and also signed up for journalism under the guidance of Mr. Charles “Chuck” McClurken. Mr. McClurken was a loved and feared teacher who addressed his students as “Miss” and “Mr.” plus surname, a practice that made me feel like I was expected to do my part. My specialties were fractured fairy tales and fictional new student profiles. When I attempted to write a satire on the 1963 movie “Beach Party” he said with his usual growl, “Miss Abraham, you can’t write a satire on a satire.” He had a good point.

Local employers had complained that many Port Townsend High School graduates had poor command of English (our native language). In the 1974-75 school year my class was handed a new requirement: Sophomore English. It sounded like a punishment, but we were lucky- -a poet, Mr. James Masao Mitsui, was hired to teach the class. The core of our instruction was keeping a journal, filled with self-penned essays, fiction, poetry and the results of a stream of consciousness exercise called the Ten Minute Free Write (9/30/1974 “Viceroy means an elephant with a rope around its trunk”). The journals were collected, corrected and graded, the stack of spiral bound notebooks returned their authors. My spelling sucked and my poems were lame, but I came away with an appreciation for writing with universal themes. Many encouraging comments in Mr. Mitsui’s neat cursive peppered my journal. Forty years later, I’m touched that he took the time and care to give a bunch of 15-year-olds so much feedback and support.

Next week I’ll be in Port Townsend for some Small-g City readings and I hope to see Ed Barcott at one of them. Chuck McClurken died some years ago; his former students certainly feel the loss. Jim Mitsui lives in Idaho. Currently, he’s teaching creative writing workshops for adults.

There’s much debate in our country about education and much criticism of public schools, but decades ago, in a small town school district that suffered a long run of levy failures, the magic still happened. I’ll bet it does today, too.