Thanks with the People Inside 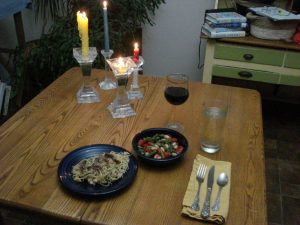 Is it just me, or does anyone else out there find it strange that a holiday honoring thankfulness is observed by a frenzied amount of travel and outright gluttony? Call me contrary, but I’ve never been a Thanksgiving fan.

But isn’t it about the Pilgrims thanking the Indians for helping them through the first winter until they could grow their own crops?

That’s the way they were teaching it when you, 9 and I were in grade school, Lily. I hate to break it to you, but that story is highly mythologized.

If this version of events was, in fact, the real deal, a more appropriate name for the day might be Thanks for Saving Our Butts Day.

I can’t believe you said butts!

When she reads this Mom won’t believe I did either, 9.

For the actual best guess at history, here’s an interesting piece from snopes.com that tells a somewhat different story, or stories:

Okay, so Thanksgiving is really more of a harvest festival?

Given the time of year, that seems logical, Lily, and why we don’t call it that might have to do with conservative religious folk thinking it sounded threateningly Pagan. If we do treat it like a harvest festival then celebration and feasting would be in order, provided you’d grown and hunted enough of a surplus to get you and your community through the winter. And certainly a bit of music and dancing and general whooping it up would be in order, too.

Speaking of which, that has been known to happen in our home town, Port Townsend. The Hilltop Tavern is a well-loved meeting place for those of us who grew up there, whether we live there now or return “home” from other places. It’s the most likely place to run into high school classmates and can be a lot of fun.

But- -the travel part. This probably happens on a dramatic scale because so many people get a paid 4-day weekend for the holiday. It’s an opportunity to see far off friends and family. If you have “two sides” of the family to please, sometimes spending Thanksgiving is the compromise for spending Christmas with those “other” people.

The airlines are completely clued in to this and raise their fares accordingly. By flying from Walla Walla to Seattle (1 hour, 212 miles) on the Tuesday following Thanksgiving instead of during the Thursday through Sunday Thanksgiving weekend, I am saving $200. One way! Driving is a good option earlier in the year, but in Washington we are famous for mountains that divide the east and west sides of the states. Mountains = passes; at this time of year, passes = snow.

Here in Walla Walla, where the three of us and Hoosegow are enjoying Thanksgiving (aka Harvest Festival, aka Thanks for Saving Our Butts Day) we are experiencing freezing fog. Yesterday it was 51F and sunny, but today, since it’s Thanksgiving, nature has to lay on ice and cold. We are making our own celebratory meal, nothing traditional (especially since the oven went out last weekend and the replacement part won’t be available until the second week of December). So, a pasta dish, cannellini bean-tomato-green bean salad, and a fabulous seasonal dessert from Colville Street Patisserie! 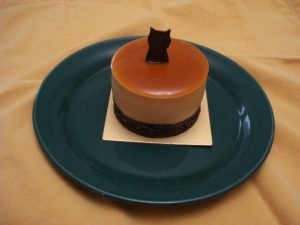 Thanks for dessert- -a cat and mousse combination from Colville Street Patisserie!

Turns out, I am thankful for a lot of things, and people, too. I have food, shelter and warmth. I’m reasonably healthy and have a lot of interesting things going on in life. It takes more than all my fingers and toes to count the people who have helped and/or been kind to me this past year, and I am flat out grateful for my friends, both long-standing and new. Next week I’ll make a quick visit to my hometown, thanks to securing a new house/cat sitter after months of searching.

On the one hand, I can be contrary. On the other, I give thanks indeed.