The Accidental Activist and the People Inside

Two weeks ago I witnessed and intervened in an unacceptable act of verbal aggression perpetrated on a public trail. This week I encountered another incident of normalized violence at Murr Sports Park, involving cruelty to animals. Seems I’m in activist mode- -no flashy cape, just cloaked in a blanket of outrage against the lack of kindness in our modern world.

It was boys again, of course.

And there were about a half-dozen of them, Lily, so I’m lucky they were small. Let me back up and explain.

Murr Sports Park is a popular place to walk in Walla Walla. The “loop” encircles a baseball field where the Walla Walla High School teams compete at home, and another large, grassy area that seasonally becomes one or more soccer fields. Yellowhawk Creek runs along the NW edge of the path. The loop is .75 miles and is mostly used by walkers, with or without dogs.

This time of year, foot traffic is heaviest before 10 AM when, frankly, it gets too hot for most of us to seek voluntary outdoor exertion. For me, it’s one of several handy neighborhood routes. My usual walk there is a brisk 5 laps, approximately 55 minutes.

Just thinking about it makes me sweat.

Or freeze if we go there in winter, 9. More about Mur here:

I was heading into my third lap Monday morning, minding my own brisk business with periodic greetings to the walkers I passed, especially complimentary observations about dogs who were taking exercise with their people. Coming into the bend near the baseball field, I noted one adult person, female, pushing a small person in a stroller with roughly a dozen other small people capering in a pod around them.

Tell me, gentle reader, what about this charming scene would cause the Accidental Activist to rise?

Here’s a clue: no one who knows you would ever, EVER throw a rock at an animal in your presence.

Especially at a cat!

Right on both counts, Lily and 9! Two boys, average age 5, each grabbed a fistful of decorative rocks from a landscaped bed and started pelting them viciously at an orange tabby who, for reasons known only to itself, was trotting alongside the human menagerie. Fortunately, their aim sucked, but that was far from the point. 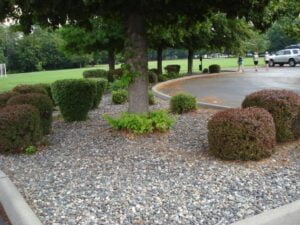 This scene appears innocent, but Monday it required a visit from the Accidental Activist!

The adult who was attempting to herd them said “Don’t do that, boys,” her voice weary. The little girls hovered near the woman, looking on in wide-eyed horror.

Deploying my super powers, my right index finger practically flew from the end of my extended arm and pointed at the culprits.

The two who’d scooped up more ammo dropped it while shooting me a sneer. Even in my rage I could see that the other boys, though poised to join in, were mere hangers-on.

The woman in charge smiled weakly and mouthed a silent Thank you. I continued my walk. The next time I passed them on the loop the group was resting in the shade. I planned to pass them with a smile and a nod but the woman said, “Excuse me, we are having a conversation about what happened and it seems that we’ve decided no one was throwing rocks.” The boys, who had taken possession of the one available bench, shot me a choral look of innocence.

“Can you tell me who you saw throwing rocks?”

This presented a moral dilemma. If the Accidental Activist is a force for good, can she also be a snitch?

When people are being mean, absolutely!

Thank you, Lily and 9. “The boy in the white shirt was one,” I said, looking him in the eyes. His body language telegraphed the most phony version of Who, me? I’ve ever seen.

“And probably the boy in the red shirt who just ran back across the field to get something he dropped?” the woman said, confirming she’d seen the rock throwing, too.

I looked at each of the kids, the girls standing patiently behind the bench, the boys seated.

Murmurs and the shaking of little heads from side to side.

“I didn’t throw any rocks,” the boy in the white shirt insisted, twisting his sneer into a smile and back again. I didn’t reply, knowing the woman in charge would probably deal with the perils of telling lies later. I tried not to think where the boy had learned to model his behavior, what his life at home might be like.

It’s a different incident than the one I observed and intervened in at Mill Creek a couple of weeks ago. Child behavior vs. adult behavior; me doing the yelling this time instead of attempting to neutralize the verbal barrage of the aggressor. But the message is the same: We cannot permit cruelty and aggression to be normalized.

And if you do normalize this poison by merely standing by?

You might find yourself in the presence of the Accidental Activist.