The Best Thing Mom Ever Did for Me Happened in Kindergarten 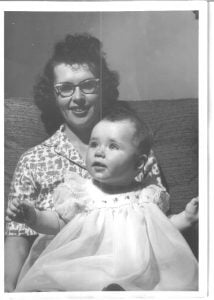 Mom (Marge Abraham) and me in the days before kindergarten, 1960.

Mother’s Day is nearly here, a natural time to reflect on the life you’ve shared, and may still be sharing, with your mom.

First, my condolences to those of you who lost your mom this past year. The first time is, I believe, hard for almost everybody. I’m one of the lucky ones who will be with my mom on Mother’s Day but I learned 25 years ago how awful it feels to be without your dad that first Father’s Day.

That said, let’s move on to happier times, which takes me back to kindergarten. In case I ever decide to run for public office I may as well tell you now that I received an unsatisfactory in “citizenship” on my very first report card ever, courtesy of Miss Elsie Barton. It was a smear campaign, involving a rumor that I’d pushed in line at the water fountain (my parents did not accept this explanation when proffered). However, Mom heroically came to my defense in a later incident, a matter involving art.

Miss Barton’s afternoon kindergarten was my first public school experience. I well remember the small rugs we rolled out for nap time and the bucket of wooden beads to be strung on leather thongs or sometimes knocked over and sent skittering across the brown and beige checkerboard floor. Trauma precludes me from remembering whether the water fountain was in the classroom or in the hall, but wherever it was it was stainless steel and low. There was always the faint odor of pee in the air.

We were taught the numbers zero through nine and the alphabet, both of which bored me to tears. My sister, who’d been in Miss Barton’s class two years prior, had already taught me those things at home. Numbers, letters, nap time and . . . coloring . . . filled my afternoons, September 1964 through June 1965.

At home, I had a Brownie camera. It didn’t work, except when I drew the pictures I’d taken myself. Mom, at that time, wore a chignon, which somehow made my pictures of her look like there was a big rock on top of her head.

My point? At age four, I had developed my own sense of art. Mom encouraged this in both my sister and me, as she had been an artist before she had kids. In addition to our free-form projects we had coloring books. Those were fun, too, and you could make the pictures more your own by. . .

How, oh how was I to know that coloring outside the lines was beneath kindergarten standards? I wasn’t a mad scribbler, not the sort who randomly charged through all eight Crayola colors with complete disregard for the mimeographed line drawings on low-grade pulpy paper that came my way. The specific incident was a matter of providing some background. It was an act of mercy. The rendition of a baby chick presented on that infamous day floated in empty space- -no barnyard, not even some nice green grass for it to stand on.

It was my moral and artistic duty to create a world for the poor little thing. I added green for grass on the lower half of the sheet and blue for the sky above. The crowning touch was a yellow quarter-circle in the upper right-hand corner with yellow lines projecting from it. Everybody needs a little sun.

Miss Barton did not take kindly to my departure. To this day, I don’t understand why. But when Mom found out about the low mark I’d received she immediately charged up to the elementary school and challenged Miss Barton. I wasn’t present for this conversation but Mom’s through-line was You will not stunt my child’s creativity!

I don’t recall if Miss Barton softened her evaluation of my work (like most kindergarten teachers of that era she did not seem the type to back down). What I do remember is Mom’s assertion that I had a right to my own creativity, and I’ve carried that thought ever since, through theatre and music and writing. I believe in my right to be an artist.

There is, however, a noticeable gap in my creative interests. Though I appreciate visual art, I will not go there as a practitioner.

Thanks, Mom, for freeing me to do the rest of it, and Happy Mother’s Day.