The Gift of Not Getting 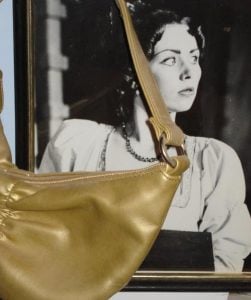 The girl and the gold bag

Christmas, in the past 200 years, has become a season of getting- -the tree, the special ingredients for holiday dishes, a gift for everyone on your list. But within this hustle of material hope, sometimes disappointment has more value.

At Christmas time, In 1870s England, a little girl named Beatrice Stella Tanner was wild with excitement. Her father was hosting a Christmas party for children and under the tree were enormous Christmas crackers, one for each child. The crackers, the children were told, contained costumes of kings, queens, princes and princesses, and Beatrice Stella pictured herself beautifully dressed in royal attire. When she opened the cracker tagged for her, breathless with anticipation she gazed upon . . . a cook’s outfit.

Beatrice Stella Tanner, her vain heart broken, sobbed without cease until the grown-ups, weary of trying to console her, left her in a room alone.

In later years, Beatrice Stella became Mrs. Patrick Campbell, one of England’s most lauded actresses. Her career ran from 1888 to 1935, during which playwright George Bernard Shaw created the role of Eliza Doolittle in his play, Pygmalion, expressly for her. Did the early lesson of receiving a cook’s outfit teach Beatrice Stella that she’d have to work hard to get what she wanted, and that the world wasn’t interested in someone who cried when life was unfair? Who can say, but the incident was important enough to include in her memoir, My Life and Some Letters, published in 1922.

I first grappled with this sort of grief when I was three years old. It wasn’t Christmas, it was spring, and Mom had purchased two sequined and beaded evening bags for gifts. They were in the laundry closet, on top of the dryer. When she showed them to Dad she said the silver one was for Myrna and the gold one was for Susie.

The gold purse was for me! How had Mom known that I would want such a beautiful thing? I was so excited it didn’t occur to me that there wasn’t a glittering bag for my sister (whose name is Ann, not Myrna), too.

My exuberant joy was soon corrected. I’d forgotten we had a cousin named Susie, who, like Cousin Myrna, was soon to graduate from high school. I squalled with humiliation when Mom gently informed me that the sequined, beaded purses were for big girls, not little girls. She hoisted me on to her hip, my bare legs dangling below the hem of my black and white striped jumper with an applique of a dachshund on the pocket. I sobbed inconsolably while she patted my back, but there was no giving in: the coveted gold purse would not be mine.

Maybe one day, when I was a big girl graduating from high school, I, too, would receive a gold purse. But styles and the opportunities available to girls changed a lot between 1963 and 1977. Mom and Dad gave me a portable electric typewriter and a set of luggage for graduation, plus a college education. By the time I was a truly big girl, supporting myself with my first post-college job, the desire to own a sparkling gold purse was gone.