The House that Kate and Jack Built 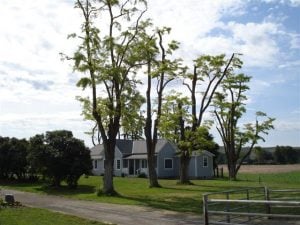 The House that Kate and Jack Built

Leaving a house after 10 years of residency is hard. With this particular house, it’s not just the downsizing of possessions, the packing, the deep cleaning and everything involved in selling the place. This house is special. This is the house that Kate and Jack built.

Lewis and Clark passed right by this site on their return trip May 1, 1806. Missionaries Marcus and Narcissa Whitman established the Waiilatpu Mission approximately 20 miles west of here in 1836. But for most emigrants, Eastern Washington wasn’t open for homesteading until the late 1850s. Thus, the arrival of Kate and Jack.

That’s Kate Walter and Jack Pettyjohn. They were toddlers at the time, children of the first two families to settle near what is now the tiny wheat town of Prescott, WA. The year was 1858. In 1890, they married. The house, located on a 2-acre parcel of the original Walter homestead, was started in 1895.

At the time of their marriage, Kate was a school teacher and Jack was a cowboy. They maintained a close relationship with Palouse tribe childhood friends. Tribal members often pitched camp alongside the millrace that ran diagonally across the southern half of the property. Kate and Jack had no children of their own. Their motto: Let us live in our house by the side of the road and be a friend to man. The motto is carved in their shared tombstone, a few miles west of here in the Ivy Cemetery.

Kate and Jack lived to celebrate their 50th wedding anniversary. They died in the early 1940s, Jack first and Kate a short while after. The Mayberry family purchased the house, then the Stapletons and the Volks. Almost a decade ago, it became ours. Over the years, we’ve met great-nieces and nephews of the Pettyjohns, still resident in the Prescott area. We learned the original house was the tall, central portion with two windows. Jack’s initials, JHP, are inscribed in a cement slab that leads to the old well house cellar, alongside the year 1908.

You can feel the history in this land, not only of the settlers but of the wars fought between the whites and the natives in the mid-19th century. It’s easy to visualize Cayuse warriors chasing regular army and volunteers south across the Touchet River, a quarter mile south. Travel back another half-century and you’ll see a Lewis and Clark encampment site a few miles east.

It will be hard to leave. I wonder who will be here after us. Will they be good stewards of this place, including the pair of autumn purple white ash trees we planted our first year, trees named Kate and Jack? The Matleys will be folded into the history of this 2.05 acres, along with the rest. History. Mortality. Eternity. None of us are immune.