The Importance of Place

One of the elements a writer has to consider for every story is where the story takes place. For one thing, it’s important to have a setting in which the action occurs. But don’t let “place” fool you- -it serves as far more than window-dressing.

When we first moved to the Touchet Valley I was awed by the majesty of rolling hills- -alternating fields green with young wheat, gold with stubble or black from controlled agricultural burn. To the east lie the Blue Mountains, distant, purple and capped with snow. A quarter-mile south is the Touchet River, tributary to the Walla Walla River that flows into the mighty Columbia. 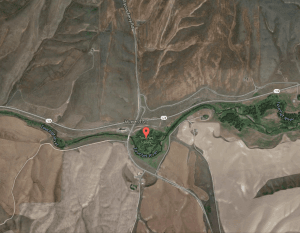 My place: Touchet Valley As Seen Via Satellite On Google Maps

Human history abounds here. The Lewis and Clark Expedition passed this way on their return trip in 1806 and were aided by the established natives- -the Walla Wallas, the Cayuse, the Umatillas. About twenty miles west, Marcus and Narcissa Whitman established their mission in 1836. The mission became an important stopping point along the Oregon Trail but the enterprise ended in tragedy in 1847 when the Cayuse tribe, decimated by a measles epidemic brought by the white settlers, killed the Whitmans and eleven or twelve others (numbers vary by source). For a decade, the native tribes and the U. S. Army fought in and around the Touchet Valley. Treaties were made, with many provisions broken (mostly by the U. S. government). Reservations were assigned. Settlers trickled in in 1858. They came to raise cattle. Clumps of native bunch grass, the resource that drew cattle ranchers to the area, still grows along roadsides. The wheat came later, inspired by a combination of soil, climate and, in the 1860s and 70s, the development of shipping and railroad lines.

There you have it- -the importance of place. And place in time. Place rightly shapes a story and often carries as much strength and importance as a character. Who was here in 1810 or 1860 or 1890? How would they have fed, clothed and sheltered themselves? What resources and challenges did the land provide? If they were new to the area, what did they miss most about the place they left behind? Place is dynamic. How does it change as the result of human actions, geological activity, shifts in weather patterns? Without the Dust Bowl of the 1930s, would John Steinbeck have written The Grapes of Wrath?

Place carries as much importance in a fantasy world as it does in the real world. Currently, I’m working on a novel set in a behind-the-scenes city on Earth, populated by immortals. It’s the intellectual, cultural and economic center of their society. People have to live and function there. I’ve drawn a map of the city. Some neighborhoods came easily (the university area, corporate headquarters, posh and touristy downtown); others raised a lot of questions. Where do the bigwigs live? How about the middle-managers and the thousands who work in the hospitality industry? What kind of transportation is available? Where are the parks and public spaces? Where do people buy cat litter? Surely they need health clubs- -nothing worse than an unhealthy immortal! I find fantasy places more difficult to write than real ones because every detail needs to be imagined. Also, there’s no need to make a research trip to a real location, which can be a welcome break from working at a desk. The upside is, if I need a particular kind place to strengthen my story, I can create it.

I made a big fuss over the Touchet Valley a few paragraphs back, so you’re probably wondering if I’ve used this place in a story. Yes, I have. “Inheritance,” a mid-19th century shape-shifter tale, was published online six years ago. Unfortunately, the publication, The Absent Willow Review, is now defunct and has disappeared from a most mysterious place- -the digital world.