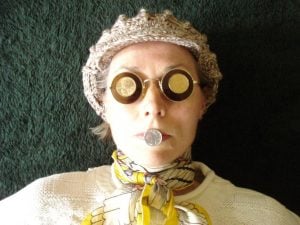 The author and money

Money. Many admirable magazines dedicate an issue to this theme from time to time. You might think money has nothing to do with you, but here’s what I think: we all have a unique relationship with money.

When I was a kid, I was known as the family miser. I deposited every nickel, dime and quarter I earned or otherwise received in my piggy bank. Every so often I permitted myself to count the loot, some odd amount like $12.19 blazing brightly in my brain. When I was nine and my sister was eleven, our grandparents took us to Disneyland. Dad, encouraging us to save for the trip, said he’d match our savings 100%. Grandpa said the same. I ended up with $45 or thereabouts, an unbelievable amount of money for a nine-year-old to have at their disposal in 1969. Enforcing my miserly reputation, I kept forgetting my money in the hotel room- -no, really, I honestly forgot to take it with me when we visited The Magic Kingdom! It was a tough situation, looking at all the swell souvenirs I wanted to buy for myself and take back as presents.  Somehow, the phrase “Grandpa, I left my money at the hotel” became a standard joke for the remainder of the trip. Grandpa, being the nicest man in the world- -well, you can guess what happened. I agreed to repay him. Somehow, I still had $45 when we got home.

My first two years as an accountant I worked as an auditor for one of the (then) “Big Eight” public accounting firms. Our audit teams performed “field work” (looking at purchase authorizations, board minutes, loan documents, etc.) at the clients’ offices to determine if the numbers in their financial statements had a reasonable basis in reality. Money becomes abstract very quickly when it’s in the millions and it is not yours. I recall spending way too much on mochas in those days, barely keeping my head above water on eighteen thousand a year. The punch line: though my salary sounded like a lot of money in 1984, the firm required us to adhere to a “suits only” dress code, own a car and not brown bag it. Bringing one’s own lunch was bad for the corporate image. I’m pretty sure the partners of the accounting firm had an ownership interest in every restaurant in downtown Seattle.

Eventually I chucked corporate life, returned to my hometown and made a living working four part-time accounting jobs. One of these jobs was at a bar and restaurant. The owners usually balanced the till and made the deposits but sometimes these tasks fell to me. Picture the coins and bills laid on a bar throughout the evening, in the good old days when smoking inside a business was legal in Washington State. Imagine what this money smelled and felt like at the end of the night. Sticky with spilled mixed drinks, grimy with finger food and as smoky as Miss America standing downwind of a campfire. Yuck, in short. I also worked for an arts organization that produced music events in multiple downtown venues (you guessed it, bars). Not only did I have to count the filthy lucre, I had to collect it at closing time, without an escort, and skulk away to the bank’s night deposit drop hoping no semi-alert thief would whack me over the head. After complaining about this at a staff meeting I was given a program volunteer as an escort. His nickname was Bill the Greek. The name made me feel safe before I even met the guy; when I laid eyes on him, I figured him for 5’ 4” and 110 pounds, wet.

My relationship with money these days is one of casual acquaintance. I rarely see it, and it rarely sees me. Writing is an interesting business that way. But I’ll never willingly trade writing for what I used to do, dealing with money every working day of my life. Been there, done that, wrote the (as yet unpublished) novella. Maybe one day it will be worth something.