The Oldest Profession and the People Inside

You know how sometimes a certain subject keeps popping up on your radar? Maybe it started when I wrote about the cowboy song The Streets of Laredo last week, and the assertion by a pair of fair-goers that the song was really about syphilis. Or maybe it started when I selected my current “read out loud” book for the cats. Maybe it’s the echo of some roles I was asked to consider in my early theatre days. Whatever the spark, the idea arrived good and solid on Monday night when a friend invited me to preview her new Living History program- -the story of a woman engaged in The Oldest Profession.

It’s doing that thing that people do that can make babies that no one’s talked to you about yet, but when one of the people charges money.

Thanks for interpreting, Lily, but I think explaining a euphemism with another euphemism has muddied the waters for 9. What I’m talking about is prostitution.

Oh, okay. Like Dad is more of defense attorney than a prostituter?

9, have you heard Grandma Mary’s joke about the House of Ill Fame?

Yeah, but I didn’t really get that, either.

I’ll consider that a good thing. But I guess it’s also time to explain all of this to you. The Oldest Profession is a nickname for prostitution. Prostitution is when people do the baby making thing and someone gets paid for it.

If you’ve studied frontier history, including but not limited to that of the USA, you know that when settlers push past the borders of civilization two sorts of businesses are there to greet them: bars and houses of prostitution. This has a lot to do with demographics. Invariably a much larger percentage of men than women are the first to arrive, an imbalance that sometimes lasts for years, decades, even. The demand for female companionship is high but the quantity is in short supply.

My friend’s Living History character is a nineteenth century Walla Walla madame, Josephine “Dutch Jo” Wolfe. Jo was an excellent business woman by all accounts, and took great pride in bringing a much needed service to pioneer Walla Walla. You can read more about the presentation, including the date and time, here:

Maybe I should go, so I can understand what you’re talking about.

Good idea, 9. In the meantime, the cats and I are closing in on the final chapters of The Valley of Amazement by Amy Tan (2013). This novel, as it happens, is about courtesans in early 20th century China. I’m a fan of Tan’s writing, so when I saw a paperback copy of this book available for cheap I snapped it up. Her prose is smooth, making it excellent for reading out loud, and there’s a cat among the characters to help my friends feel included in the world of the story. 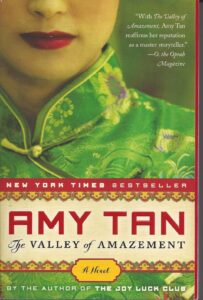 The courtesan world of the early 20th century China fascinates me. The courtesans were often accomplished singers, musicians and storytellers in addition to their more widely known duties. The potential patrons of courtesans had to compete for their favors with lengthy courtships and expensive gifts. The successful patron made a contract with the courtesan for one or more seasons. A mock marriage ceremony was held to solemnize the deal.

Many in the profession in early 20th century China were not at the exalted level of courtesan. There were lesser houses with some but not all of the rituals, also services available in opium dens, and practitioners working the brutal city streets.

Which brings me to my early theatre days.

I guess I could play a prostitute if it was someone from Shakespeare, like Doll Tearsheet.

Not even close, Lily. It was the play Hot l Baltimore by Lanford Wilson, first produced by Circle Repertory Company in 1973. The play is set in the lobby of a decaying Baltimore hotel, at a time when the residents are about to be evicted as the building has been condemned. Three of the characters are prostitutes. 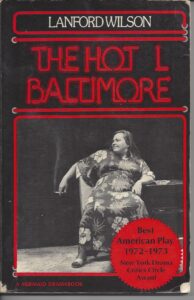 My first opportunity to audition for this play was at Whitman College, 1978. The director asked me to audition for Suzy, one of the prostitutes (also referred to as hookers, 9). I didn’t usually talk to Mom and Dad about auditions in advance but this time I did because Suzy appears onstage nude for a brief moment at the end of Act One.

As you can guess, it was a non-starter for them. Perhaps cutting off my tuition was mentioned in our lively discussion. In any event, I decided not to audition.

I remember getting a lecture from the director about not wanting to do theatre badly enough, that I wasn’t willing to make enough of a sacrifice. Acting is a demanding and sometimes brutal profession. Lots of hopefuls will take big personal risks to land a role but she, the director, no longer believed I was one of them.

The next year, back in Port Townsend, I was cast in the Key City Players production of Hot l Baltimore, not as Suzy but as a young, fresh-faced prostitute called The Girl who has an inquisitive and highly romantic nature.

Wait! They did a show with nudity at the Key City Playhouse?

Not quite, Lily. The woman who played Suzy appeared in her underwear. That was enough on-stage excitement for Port Townsend in 1979. 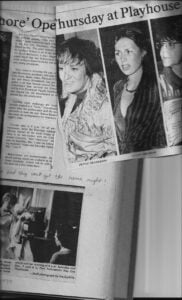 My theatrical stint in The Oldest Profession, November, 1979.

When I think of The Oldest Profession I think mostly of the abuse inflicted on those professionals. I don’t judge them, though. So often prostitutes are forced into that role, sometimes by another person, sometimes by simply needing the money to survive.

Over the past sixty-one years I’ve observed there are worse things people will do for money.