The Queen and the People Inside 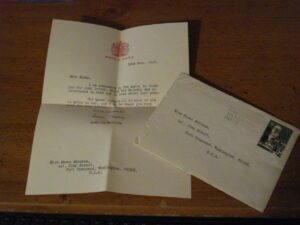 Just when I knew exactly what I was going to write for this week’s blog, something stunning happened. After a double workout of strength training and swimming I made a recovery snack and turned on the radio. They were saying something about Queen Elizabeth II. In moments, it became clear she was dead.

I think so, too, Lily, and though we’ve been hearing for months that she was struggling with her health it still comes as a shock. She’s been Queen of England for seventy years, longer than even today’s me has been alive.

I agree, 9. And you don’t know this yet, but when we were twelve we had a little bit of correspondence with her.

Every so often I get the urge to write to someone famous. Back in 1972 I read The Little Princesses by Marion Crawford. The author had served as nanny and governess to the princesses Elizabeth and Margaret. The biography was not authorized by the British royal family and they found some of the observations within it too frank. The book, I’ve just learned from Wikipedia, caused a permanent rift between the royals and Crawford, but her account fascinated me.

When Queen Elizabeth was a girl she had ponies, and had a lifelong love of horses. At twelve, I, too, had a pony (a Welsh pony which I thought would be of extra interest since she had been Princess of Wales), and that is what I wrote to her about. How do I know this? It’s not because I saved a copy of my letter- -I didn’t. Instead of relying on memory, I can read her reply. 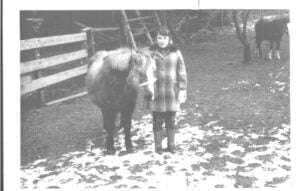 Since the Queen loved horses and had been Princess of Wales, I thought she’d like to know about my Welsh pony. With Wee Chocolate, 1968.

She wrote us a letter?

Not directly, 9, but she commanded one of her ladies in waiting do it for her. The envelope and sheet of paper are heavy, and marked with the royal coat of arms. 1972 was a time before people had personal computers and printers; the typeface is definitely that of a typewriter. Susan Hussey was the name of my correspondent. Dad said the Queen probably asked her to write to me because we had the same first name.

It was a gracious gesture, maybe more gracious than I realized at the time because I’m 99.9 percent sure I mentioned The Little Princesses in my letter, a child’s faux pas that Elizabeth II clearly forgave.

Good thing it wasn’t Elizabeth I, she probably would have had you executed!

Thanks, Lily, I can always count on you for drama.

Elizabeth was a mere 20 years into her 70 year reign when she commanded Susan Hussey to reply to my letter. Though my prose, I’m sure, was bumbling, I hope she was pleased in that moment that a little American girl had made the effort to write to her. Fifty years later, I am still incredibly touched that she replied.