The Story of the Hat and the People Inside 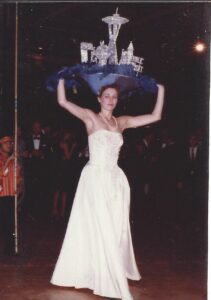 Every so often I post a picture on Facebook that creates a stir. This week a photo from 1985 prompted several folks to say Tell us about the hat!

Referring to the photo, above, you can see that it is not just any hat. It is an enormous hat with iconic Seattle buildings on top of it. The person supporting this work of art is me, age 25.

Lily, you don’t know the half of it. At twenty-five, I thought I was very worldly and knew everything worth knowing. That assessment proved inaccurate, but I did have one thing going for me: I definitely had well-connected friends.

The hat was part of a fundraising event for Seattle Repertory Theatre, their annual gala. It was a big deal dinner dance for well-heeled supporters of the arts, and a close friend of mine just happened to work in the Rep’s development department (aka, fundraising) that organized the event. She was the one who volunteered me for my highly glamorous task.

Well in advance, my friend (I’ll call her M) gifted me a vintage strapless gown, what she called the Fifty Cent Ball Gown. She’d literally bought it at a yard sale for fifty cents when she was a little girl. The dress was a fabulous confection of ivory taffeta, sequins and pearls from I.Magnin, women’s size 15. I was closer to a size 8, so alterations were in order. A brilliant Turkish tailor worked across the street from the theatre. It was a difficult alteration as the bodice was reinforced with about 20 metal stays, like a corset. For under thirty dollars (an amount it took me three hours to earn at my prestigious but woefully underpaid public accounting job) the tailor cut down the bodice and moved every single rib!

Then came the hat, constructed in the Rep costume shop from Styrofoam, royal blue silk, glitter and ostrich feathers. Models of the Space Needle, the Monorail, the PI Building and the Smith Tower were affixed on top. The hat was mounted on something like a swimming cap. I had to raise my arms and balance the brim with my hands to keep it from sliding off. Until the night of the gala, losing the hat was my chief worry.

At last the magical night arrived! The venue, a ballroom at the Westin Hotel, was partitioned into two sections for cocktails and dining, and was elegantly decorated with silhouettes of the Seattle skyline. My job was to lead the transition from cocktail hour to dinner. Here’s how it would work:

At the appointed time, I would enter the cocktail section in the smashing ball gown and the vast theme-invoking hat, make a circuit of the room, and head for the partition doors which would slide open as if by magic, parting the way for me and the following crowd.

I had just finished donning the evening gown in a storeroom off the hotel kitchen. M arrived, to escort me upstairs to the ballroom. The hat was mounted on my head in the ballroom foyer, after I got off the elevator, for clearance purposes. The foyer was quiet, but not unoccupied. A group of children, dressed in vivid costumes of orange, gold, purple and red, and carrying long sticks wrapped with ribbon waited quietly outside the ballroom door.

If you’ve ever attended the Seattle Seafair Torchlight Parade, you’ve doubtless seen the Filipino children’s marching unit. They move down the street with precision and perfectly synchronized percussion, created by tapping the ends of the sticks on the pavement. They also move incredibly fast.

I looked my question at M.

“They’ll be behind you,” she explained. “Whatever you do, don’t stop.”

I remember those kids! They’d march right over you if you got in the way.

My thoughts exactly, 9. At least I wasn’t worried about losing the hat anymore.

M cued me into the cocktail area. I strode through the door, the menacing sticks tapping behind me. The patrons, a cocktail or two to the good, moved languidly out of my path as I broke trail. The one or two times I had to slow down, displaced air from the pounding of sticks fluttered against the back of my gown. Faces blurred by, except for two: the partner in charge and the personnel partner from the accounting office where I worked.

This was another surprise, but I had no time to dwell on what they might be thinking, these guardians of conservative values seeing their employee in the role of showgirl. I finished the circuit and bore down on the partition doors. The kids marched ferociously behind me. I couldn’t slow down! My nose was inches from kissing the barrier when- –

Lily, 9, never doubt theatre magic! The Rep’s stage crew whipped the partition doors apart seconds before impact, releasing the sea of me and the stick-wielding children into the dining area. Whew! M was standing by an exit at the far side, signaling me. My wild and glamorous evening was drawing to an end.

Ah, but not so fast! Once the hat was removed M escorted me over to a pair of well-groomed men in tuxes. They were a couple I recognized from some party or other. One of them, M informed me, was the dinner partner of an elderly female patron who was a substantial donor to the Rep. The other man would be my date. The patron had paid for dinner for all three of us.

I looked at M, amazed.

“You have to eat, anyway,” she said. Sensible words, reinforced by the expression in her eyes that said Do this or else!

In spite of my surprise I rallied, retired briefly to the ladies room to fluff up my hat-smashed hair (thank goodness it was the era of the perm) and joined my very handsome, highly entertaining Date, who, as a bonus, was a former Arthur Murray Dance instructor. We had a blast, faking our way through barely knowing each other in front of four other couples at our table, people I’d never met but whose names I recognized as the Boomer generation of Seattle’s elite. And, oh, could my Date dance! It was a Cinderella moment, spinning around the floor with him, twirling out at arm’s length and back into his confident embrace. The partners from the accounting firm were moving around the floor with their wives. At the end of one dance we all chatted for a moment, like we were old friends instead of boss men and very junior accountant.

If the evening had ended then, it would have been perfect. But you know how dancing is- -you always want just one more.

That is exactly how I feel. I don’t even care if I have a partner.

That’s wise, Lily, because that night, I ended up with two.

My Date and I started dancing again, and it all went beautifully until someone lurked up behind him and tapped him on the shoulder. It was someone I knew. Not one of the partners, but an Artist who’d had a studio in my home town when I was a little girl. He’d painted a portrait of my sister and me, and lots of other people in town. Since then, he’d made a splash with Seattle’s upper crust. His portraits had become a status symbol.

Quiet, girls, we’re keeping identities private in this piece. This Artist was a very nice man (he has since died) and our social circles sometimes intersected. This particular evening, though, he was sloshed. I’d already talked to him once, when he’d informed the people at his table that he used to change my diapers when I was a baby (lies!). I’d done my best to politely avoid him after that. This time he was relentless because, by his lights, he was on a mission of mercy.

My Date, who also knew the Artist, gallantly stepped aside. My dancing world spiraled out of beautiful ballroom to falling down drunk jitterbug. The Artist staggered towards me, saying I didn’t understand, that I didn’t know what would happen when it was time to go home, that I’d need money for a cab. The dear thing was worried that I didn’t know my Date was gay. He feared that I, the child whose diapers he’d changed (still a lie!), would get ruthlessly dumped by my Date after the gala, left on a grimy Seattle sidewalk with no way home, there to be preyed upon by all the worst Seattle had to offer.

I tried to explain to the Artist that I’d come with friends and that I had a ride home with friends, but the music was loud and his hearing wasn’t the best. He kept saying No, you don’t understand. Then, he reached into his tuxedo pocket, pulled out a wad of bills and pushed them toward me.

At that precise moment, I saw the accounting partners in my periphery, standing at the edge of the dance floor, watching.

The Artist kept waving the money at me. What to do, what to do? I timed it to spin past him, grabbed the money, and stuff it down the front of my ballgown with my back to the partners. Though slightly built, I trusted the twenty-some metal stays in the bodice would prevent the bills from falling through.

My maneuver must have worked because I still had a job on Monday. Immediately afterward, the swing band called last song. I thanked the Artist for the dance (manners first!) and bee lined it back to my Date. We joined our circle of mutual friends, including his real-life partner whose date had already been chauffeured home. I rode back to Capitol Hill with M and other friends who lived in that neighborhood. We stopped at Charlie’s on Broadway for whopping big hot fudge brownie sundaes and shared our stories of the night’s events.

That is the story of the hat: glamour, suspense, dancing, comedy, and sundaes.

It checks all the boxes for me.

Ditto! Especially the part about the sundaes.