Ban-Lon: a blast from the past!

It’s a huge transition from wife to widow, with many small steps along the way and some interesting discoveries. For example, Bruce’s closet. I was looking through his things for warm shirts to donate to the local homeless shelter when I happened upon a relic from decades past. The subject is Ban-Lon.

If you’re under fifty years of age, you may not know about Ban-Lon. According to Wikipedia, Ban-Lon is:

“. . . a trademarked, multistrand, continuous-filament synthetic yarn used in the retail clothing industry. It is artificially crimped in order to achieve greater bulk than ordinary yarns. It is frequently associated with 1950s and 1960s American clothing and culture, and at the time was most commonly used to make sweaters.”

You can read more about Ban-Lon, including its use as a punch line, here: 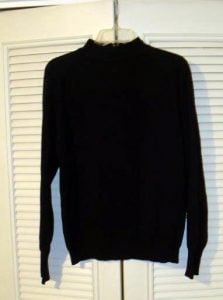 Ban-Lon mock turtleneck, c. 1960s. Believe me, it looks best from a distance!

But what, pray tell, is Ban-Lon doing in Bruce’s closet? It’s a black mock turtleneck from Puritan, a men’s clothing brand that I remember from daytime television commercials when I was a kid. This relic is not fit for donation. It’s badly pilled and has a patch sewn under a hole in the left breast (a near-miss in fencing class?). In nineteen years, I never saw him wear the darn thing. Why, oh why did he hang on to this weird, worn out garment?

All I can figure is, it must have sentimental value. This made me think of an old passport photo of Bruce taken in his early 20s. After examining the black turtleneck he’s wearing in the photo through a magnifying glass, I’m pretty sure it’s the same shirt I put through the wash a couple of weeks ago, hoping that this would improve its appearance.

Nope. It’s still a grotty mess. But it’s also history. Perhaps it was something he bought to work on a stage crew. Maybe wearing it made him feel like a folk singer or a beatnik or a man of the world. Young minds are a treasure trove of “what ifs” and bright but angst-tinted presents and futures. Maybe at the time he also toyed with smoking a pipe?

Whatever the reason for the purchase and preservation of this shirt, it’s mine now. Am I going to pitch it? No. In fact, I’m pretty sure I’m going to wear it, probably just at home the next time I want to play folk singer or beatnik. Though it would be visually interesting, I’ll pass on the affectation of a pipe.