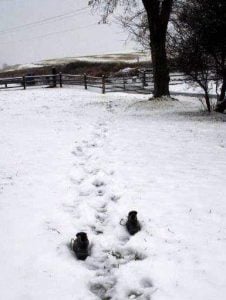 Snow boots, tracking under their own steam

At this time of year there are many ways to indulge in the tracking life. In the morning I can search for deer tracks in the front yard snow. There’s also the time-honored ‘keeping track’ of the long list of things to accomplish for the holidays. My faithful steed the Nordic Track helps me burn off the seasonal treats. And then, there’s the United States Postal Service (USPS).

One of the two things I insisted on when we moved to Prescott, WA (besides a house to live in) was a nearby post office. (The other was a library.) I’ve had pretty good luck with getting packages delivered intact and on time, even during the holiday season. This year something went terribly, terribly wrong.

On December 18, one day before the USPS cutoff for getting packages delivered before Christmas, I took my last two boxes to our local post office. Everything else had gone out the prior week but these two boxes contained things I’d made over the weekend, including fudge and dog biscuits.

I arrived just after the UPS delivery person. He’d stacked the post office counter with about a dozen boxes, all from Amazon.com. Our trusted and excellent postmaster looked slightly dazed. The three of us laughed about how crazy it gets at this time of year. The postmaster scanned in the UPS boxes, cleared them from the counter, weighed my two packages and collected the priority mail fee. She handed me the tracking receipts and all seemed well.

Do you love USPS tracking as much as I do? This is how I spend most of my time as a tracker (after all, it’s not always snowing and it’s not always December- -it just feels that way right now). It’s fun to follow a parcel’s progress to its destination and satisfying when it arrives. The package of fudge was delivered in 2 days! The other package, however. . .

For reasons then unknown, the second package, destination Port Townsend, WA, went joy riding from Spokane to Seattle to Pasco, WA, where it was rumored to be “out for delivery.” I stopped by the local post office December 21 to inquire about this frolicsome parcel but they couldn’t help me because their internet service was down. December 22 we had quite a bit of snow so I didn’t venture out. By the 23rd, I at last realized I could contact USPS online for assistance.

Ever notice how this kind of wrinkle tends to come up on a holiday weekend? eCustomerCare National’s “In order to better serve you. . .” e-mail arrived Tuesday, December 26. They had forwarded my inquiry to “an office that is better suited to address your needs.” This phrase chilled my heart as I interpreted it to mean “your inquiry has been consigned to the frozen core of Hell.” Turns out they’d referred my case to the postmaster at the intended destination, Port Townsend, WA. He called that very day instead of in “2 to 4 days” as predicted by the online folk and, once he’d clarified the circumstances of my inquiry, got down to work.

By this time the package had scampered from Pasco, WA to Spokane, WA and back again. The next morning it arrived in Seattle. Again. Progress, I thought, and fortunately decided to let the Port Townsend postmaster know about this because he called the Seattle distribution center to make sure the package was headed for Port Townsend. Nope! It had once again been sorted into the bin for Pasco. The person he contacted in Seattle retrieved the package and put it in the bin for 98368. At last the homemade dog biscuits, catnip mice (see last week’s blog for details: https://www.susandmatley.com/official-blog/tips-for-making-catnip-mice/) and hand-knit scarf were on their way to Port Townsend!

What inspired the Case of the Roaming Christmas Parcel? Technology, of course. The local postmaster had somehow keyed in a Pasco, WA zip code which electronically created a Pasco-compatible address with the same street number as the Port Townsend destination. This information was printed on a bar-coded label and affixed to the package. During the delivery process, USPS workers scanned the bar code without also looking at my mailing label. Why would they, since it should have been one and the same, information-wise?

I am happy to report that the package arrived at its destination at 11:21 AM, Thursday, December 28, 2017. In spite of the mix-up caused by an input error I remain a fan of USPS tracking. After all, it’s been quite an adventure.