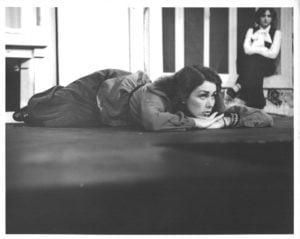 In Jules Feiffer’s “Hold Me,” Whitman College, 1978: theatre days before I became an audience.

Last Sunday a friend and I attended the closing performance of “Crimes of the Heart” (by Beth Henley) at the local community theatre. Mid-way through Act One a strange thought occurred to me: though I’d staged managed a production of this play in 1994, I had never seen it! The characters, of course, were completely familiar, also the words they spoke. But seeing them in action was a brand new experience.

I started thinking about “our” cast, our Lenny, our Meg, our Babe, each of them dear friends of mine. By intermission, I was swamped with nostalgia. Good thing the friend I was with was my best friend from the sixth grade (long story) or I might have become completely untethered. Soon, another realization dawned: at long last, I am an audience. 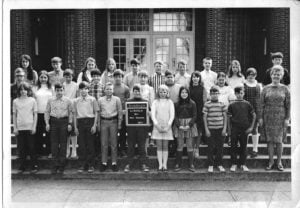 Sixth grade! My best friend Cheryl is in the front row, 3rd kid from the right. I’m in the back, third from the left.

I’m not in the audience all the time, but much more than in days gone by. I still take the stage at Fort Walla Walla Museum to share my Living History presentation as Whitman Massacre survivor Matilda Sager Delaney but only for a few performances, including outreach, per season. Just five years ago I was still on the road for weeks at a time as half of the cowboy music duo Nevada Slim & Cimarron Sue. We’d performed together for fifteen years and chalked up more than 1,800 performances. For both of us there was a side-effect to all this on-stage time: when free, we were reluctant to go anywhere near a stage for entertainment purposes. 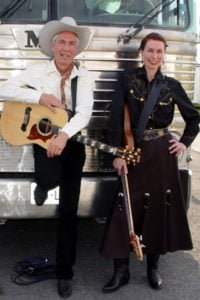 Show biz- -we’re smiling, but it’s not always as fun as it looks! With Bruce Matley.

This year, thanks to my sixth-grade pal, I’ve seen three plays in three months. There’s a lot of entertainment available in Walla Walla, with three colleges and many local performing arts groups. Now that I’m in the audience again, I’m just about certain I’ll attend another production this month, Shakespeare’s Twelfth Night at the Whitman College Amphitheatre.

I have tremendous fond memories of the Whitman College Amphitheatre. In May, 1978, I performed there myself in Euripedes’ Hippolytus. There’s nothing on this earth like Greek tragedy under the beating-down Walla Walla sun! I was a member of The Chorus, a convention of Greek tragedy defined as “a group of actors who describe and/or comment on the main action of the play.” (Thank you, Britannica.com.) The Chorus can comment through song, dance, recitation or all three. We were a reciting chorus. I’ll bet the three other female Chorus members can still remember our opening speech:

There is a rock streaming with water

Whose source, men say, is ocean

And there flows from the heart of its stone a spring

Where pitchers may dip and be filled. . .

And so on. I well remember the brief pause we were directed to take before the words “a spring,” just a quick beat that probably made us laugh as we got used to it. It would have been more subtle to indicate the location of the spring with fluttering “jazz” hands.

The costuming followed historic expectation, meaning we wore togas. Fortunately, most of the costumes were made of muslin, very practical in triple-digit temperatures. One poor soul, however, was saddled with a toga of dark green burlap. Perhaps he’d annoyed the costumer? In one particular scene the female and male members of The Chorus were paired off as romantic couples. We were given a variety of sensual poses to hold during our group recitation. I was sentenced to a full body reclining position on- -you guessed it- -Burlap Man. It was a sweaty, itchy experience. As uncomfortable as I was, I was amazed that my partner, suffering the combined discomfort of 1. being draped in burlap and 2. having a girl who’d gained all of her “freshman fifteen” and then some stretched out atop him, retained consciousness.

The title character Hippolytus died, of course, but at least he was costumed in a short, breezy toga. Ours were down to the ground. One of the female Chorus members got the strangest look on her face during our most serious recitation. We found out later there’d been a bee up her toga.

Yup, there’s no business like show business. After performing Hippolytus in scorching mid-day conditions (we had to do matinees because most of us were also in Pajama Game, Whitman’s big blow-out end-of-year musical production), watching Twelfth Night from the audience should be a snap. Especially since the presenting group, The Rude Mechanicals, have the sense to start the show at 7 PM. Chances are, temperatures will only be in the upper 70s/low 80s by curtain. At their website, The Rude Mechanicals make the tantalizing suggestion that audience members should bring blankets and picnic baskets.

Outdoor theatre in cool comfort, including snacks! If I’d known life could be like this, I might have joined the audience years ago.