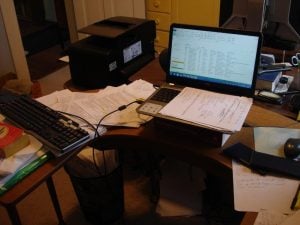 Welcome to the Third Draft Follies! The dreckish first draft of my upcoming novel Beyond Big-G City has been pounded and shaped into a respectable second draft. Now I’m closing in on the third draft, after which I hand it over to my friend the Line Editor From Hell (LEFH) for a thorough critique.

Every story I write has a different process. Small-g City started as a short story with a limited plot. It passed through several different plots that didn’t work and finally resulted in a world and actions I believed in. The story, set in Seattle, covers a few days and is played out by eight main characters.

I had a head-start with Big-G City, as I knew the characters from the first book, but the action moved to their behind-the-scenes world, about which I knew nothing. Who knew transportation in the City of Mount Olympus was by horse-drawn chariot? I knew a little bit about Athens U and Athens Tech and had a sketchy knowledge of the workings of Olympus, Inc., beyond their achievements in Seattle. The characters, as it turned out, had lives of their own. Zeus suffered from depression, not sure what to do with himself after he stepped down as CEO. Hera was on the sauce. Veronica entered a pact with a dark power. And so forth.

Beyond Big-G City evolved differently than the first two books in the series. For a while I subtitled it “The Search for Dad” as much of the plot concerns David Bernstein’s quest to learn the identity of his mortal father. He trots the globe from Petra, Jordan to Seattle, Washington, with many stops in between. But wait, there’s more! The action starts in 2025 and the world itself is noticeably different. Hermes is on the hook for climate change, since he’s the one who taught mortals how to exploit fossil fuels. Chthonic monsters, a corporate joint venture between love and marriage and a malicious baby thicken the plot.

In the third draft, I’ve been scouring the manuscript for errors and inconsistencies, restructuring awkward sentences and paying special attention to setting. Perhaps it’s my acting background that nudges me to create backdrops with minimal detail. I prefer minimalist settings as a reader, but as a writer I don’t entirely trust myself. Last week I re-read the entire manuscript and made notes (hand-written, for variety) about the settings of each and every scene. Most of them passed my inspection. I added a few details here and there and laughed when I discovered one setting described only by a chess set. Setting is also affected by which character has the scene’s point-of-view; someone new to the setting will notice different details than someone who goes there every day. A couple of adjustments were needed in this regard, as well.

One of the many beauties of writing: no life experience is wasted. When checking plot and character arcs, I use Excel spreadsheets, a tool from my accounting days. Under columns headed Date, Point Of View (POV) Character, Plot Thread, Gain and so on, I enter information for every scene. I then sort the information by Plot and POV Character to identify gaps. For Beyond Big-G City, I discovered two scenes that needed to be re-written in a different character’s POV, to heighten the tension. I also saw where new scenes were needed to improve the flow.

Sometime next week I’ll finish the third draft of Beyond Big-G City and send it to my friend, the LEFH. I’ll take a break from the project while it’s in his hands, do some needed interior painting and read through the stack of books I’ve accumulated over the past several months. Who knows, I might even clean my desk. Thus rested, I’ll advance to and beyond the fourth draft, with the goal of submitting a well-polished manuscript to my publisher by mid-March. Fingers crossed, if you’re looking forward to the further adventures of my immortal friends!