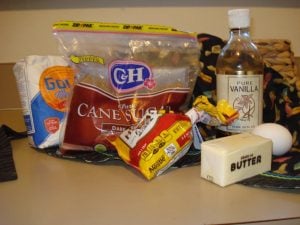 Sugary sweets, waiting to happen. And what about the sugary sweets of literature?

As Halloween approaches, it’s natural to think of a diet overcharged with sweets. Even kids who participate in “downtown shopping area” kinds of events, sponsored by the local Chamber of Commerce, are likely to come home with a bag full of the good (chocolate), the bad (in my case, licorice) and the ugly (you may fill in the blank). But it’s not candy that got me thinking of an overindulgence of non-nutritional sweets. It was a book. A research book, to be exact.

My current writing project is volume two of a story set in seventh grade, 1971-72. Though drawing heavily on my own recollections of that time when I was, in fact, in seventh grade, several plot threads have required research. This is because, as a writer, I cannot resist pursuing the unknown. For instance, I have a team of seventh graders charged with the task of representing Morocco at a junior high United Nations Day event.

While it’s relatively easy to read up on Morocco basics (Casablanca, Atlas Mountains, predominately Muslim religion) it’s a more difficult task to find printed sources that were available in the year the story takes place, books that my character could have read in preparation of the big day. A search of the Walla Walla Lbrary collection yielded King of the Wind by Marguerite Henry © 1948. The local used book dealer found me a copy of Lords of the Atlas by Gavin Maxwell, originally published in 1966.

If you are a horse lover, you’ve doubtless read King of the Wind, a boy and horse tale based on actual historic events that started in Morocco. My protagonist, Lily Adams, is far from horse crazy and doesn’t find this book very useful in researching her assigned topic, Moroccan history. Fortunately for Lily, her local library also has a copy of Lords of the Atlas. This book rolls out a dramatic history of the Glaoua warrior tribe, their ascent to power and spectacular downfall in the first half of twentieth century. Now all Lily has to do is scour the library’s periodical directory for more current topics, including the attempted assassination of King Hassan II, in 1971.*

Which brings me back to my local library. My search for Morocco titles yielded some helpful nonfiction books for young readers, books that briefly describe history, geography, culture, food, religion and so on. But (!) I also found a memoir-based nonfiction work, The Spy Wore Silk, by Aline, Countess of Romanones © 1991. This book is set primarily in Morocco, in the same years covered in my story. The primary story line deals with the failed 1971 coup and assassination attempt of Morocco’s ruler, King Hassan II. My character, Lily Adams, uncovers a few terse lines about this in the available sources and that’s all she needs. I knew perfectly well I didn’t need to really read The Spy Wore Silk for research, but. . .

Aline, Countess of the Ramanones (1923-2017), was an American-born jet-setter who married into Spanish nobility. Before her marriage, she worked for the OSS, precursor to the CIA, during World War II. Later, she had occasional assignments with the CIA, one of which was the prevention of the first assassination attempt on King Hassan II. By a fortunate social connection she and her husband are invited on a lavish shooting party by the king, himself, a many-day tour through the Moroccan countryside featuring luxury and privilege at every turn. But (!) Aline has received information that the assassination attempt will be made in 10 days. The day she joins the party, there are nine days to go!

The twin clocks of espionage and deceit tick mightily as we’re made privy to intrigue, lust for power and forbidden romance. The characters are either super-rich, members of the Moroccan military or lowly servants, including a troupe of belly dancers who don’t look very good up close. And the clothes Aline and the other super-rich women wear- -wow!

In spite of the fact that this book reads like a romantic suspense novel, I did get a couple of takeaways from The Spy Wore Silk. For example, men of the Muslim faith could (at that time, anyway) take up to four wives. The main drink of hospitality in Morocco is sweetened mint tea, often served with cookies.

At last we get to those tempting, sugary sweets! Also a metaphor. For me, The Spy Wore Silk is the literary equivalent of eating a 3-layer coconut cake, by myself, in one sitting. When I reached the thrilling conclusion I felt stuffed full of things I didn’t need to know, but the journey was a heck of a lot of fun.

Aline, Countess of Ramanones, wrote three “spy” books as well as other fiction and nonfiction titles. Did the events in her memoir-based books really happen? Certainly she has her critics. You can read more about her here:

Whether you enjoy reading fact or fiction, I hope you’ll dip your toe into unfamiliar genres from time to time. When you do, I caution you to bring your toothbrush.

*A second coup and assassination attempt was made in August, 1972, but that happens after my story’s timeline.