Travel and the People Inside 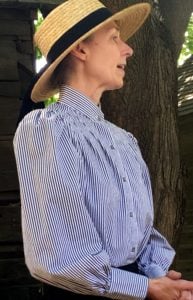 An additional person in our travel group: Matilda, up close, May 12, 2019. Photo by Carla Woodend Giger.

Yay, we’re going somewhere! For the first time in almost a year Lily, 9 and I are getting out of the southeast corner of Washington State and driving (hold onto your hats!) OVER 100 MILES to Baker City, Oregon. We’ll have another travel companion with us, Matilda Sager Delaney, who will borrow my voice and body for 10 performances at the Oregon Trail Interpretive Center, August 28-30.

I am so psyched!

According to the online Urban Dictionary, psyched means “to be excited or pumped up about something.” I’m psyched too, Lily! Already I’ve put a month of preparation into this, rehearsing every day and refining my script.

It’s an hour-long presentation, so there’s lots to remember. Keeping the arc of events in sequence and weaving in the details of the complicated history of the Whitman Massacre (November 29, 1847, Waiilatpu Mission, Oregon Country) is vitally important to understanding what happened. I’ve been “off book” (a theater term for rehearsing strictly from memory without reference to a script) since last Friday. This week, I’ve been doing tech (short for “technical”) rehearsals, performing outdoors at the times of day stated in my contract in order to acclimate to the heat.

I’m also stress-testing my portable battery-powered sound system to see how long it functions between re-charges. I may not need this for every performance, but with 3 to 4 hour-long shows a day I like to have the option.

And we’re staying in a hotel!

Neat! Does it have a pool?

It does, 9, though I’m not sure if we’ll be allowed to use it, given the pandemic. I’ll take a suit, just in case. It would feel so good to move through water after a long, hot day of performing.

The story of Matilda Sager Delaney’s life is crowded with incident. Her parents died when she was four years old as their family made their way across the Oregon Trail. She was 8 when the Whitman Massacre happened, and directly witnessed the deaths of her brother, Frank Sager, and her foster mother, Narcissa Whitman. Others she loved were killed that day as well.

Wow, she was even younger than me!

That’s a lot for a little kid to deal with.

Truly, Lily. Her life was marked with many more tragedies as she moved from childhood to young womanhood to the age I portray her (58, in the year 1898) and beyond. But Matilda had a lot of grit and a lot of resilience. That’s what attracted me to her and what makes her story relevant.

It’s also a relevant history to me, personally. Reliving Matilda’s grief and losses has helped me process my own. That’s one of the beauties of acting: the art and craft of layering your own experiences, emotions and sense memories into the character to bring them alive.

I’m learning about all of that right now. It’s just- -magical!

About some things, 9. I get nervous about getting there, seeing the venue and figuring out how things work to get the performance up and running. But once I’m costumed and in character, Matilda’s in charge. With her life and experiences there’s not much that can scare her. And she’s eager to share her story.

And when we’re done for the day and back at the hotel, I hope she doesn’t hog the bed.