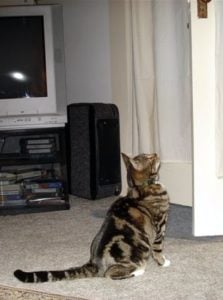 Last Saturday, Leap Day, was the day Grizelda Matley, my dear feline friend, moved on from this world. I’d been treating her for a hyperactive thyroid and seizures for nearly a year and for renal failure for three months. Though she’s been in obvious decline the past couple of months, she was still eating, drinking and taking herself to the back deck to lay in the sun through last Friday evening. That night, seizures started coming every half hour. She was coughing up blood. I had promised her many times I’d help her make that last step. It being after regular business hours and also the weekend, the nearest veterinary services were 50 miles away in Pasco, WA.

I called the emergency number, talked to a vet tech, looked at the clock. It was coming up on 10 PM. I was exhausted from a day that started at 4 AM and wary of traveling on Highway 12 in the middle of the night, reluctant to encounter an intoxicated wine tourist en route. I cuddled up with Grizzy, watched, waited and soothed her through her convulsions. Daylight, came at last. We bundled into the Subaru and set off on that last trip to the vet.

And she said goodbye to the boys.

Yes she did, Lily. Lily, my inner fourteen-year-old, is with me on this journey of sadness and loss. If you’ve yet to meet your inner person, whatever their age, this is more help than you can imagine.

Before putting Grizzy in the carrier I took her around to see the boys- -Doc Holliday, who joined the family just after she did in 2007; Friday June the 6th, who came to us on that day in 2008; Friday’s friend Piebald, still feral, who has allowed me to feed him since 2011; Hoosegow, the baby of the family who arrived in June 2013. Hoosegow and Grizzy, both tiger tabbies, growled at each other in farewell. I couldn’t find Piebald. Friday had become increasingly protective of Grizzy as she deteriorated. They touched noses, as did Grizzy and Doc. From the solemn expression in Doc’s eyes and his drooping tail, he clearly understood the gravity of the moment.

It’s an old story- -a port installed for syringes of sedative and that last drug that spells goodbye; a deliberately tearless time holding her in my arms in a warmed blanket, murmuring words of praise for my good, brave girl; allowing myself to notice how tiny and fragile she’d become no matter how much care I gave her, no matter how much I hoped she’d somehow improve and go on forever. Grizzy was uncharacteristically silent throughout, a clear indication that she was ready to go.

Through the kind and compassionate hands of the ER veterinarian she at last made it to that place of health and rest. When she was gone, my words of thanks were choked with tears that have hovered since at least early December. I no longer had to be brave for my girl.

You didn’t cry much, really.

No, I didn’t, Lily. I’m not a crier by nature. But the crying felt good. So much broke loose inside of me- -the delayed grief, the mental and emotional exhaustion from a solid year of medical effort on Grizzy’s behalf, the realization that she had enjoyed good quality of life until just before the end. And, most reassuring of all, that Bruce had met her on the other side. How could I not smile, picturing her cuddled in his metaphorical arms, a large ball of light embracing a smaller one, shining bright?

Yeah, me too. But that’s as it should be, don’t you think? In life, Grizzy was a petite yet fearless presence, ever ready to take on the boy cats who outweighed her double and more. She was independent, refused to come in the house for two years after she joined the family and loved to take naps in the abandoned magpie nest in the lilac hedge regardless of how hard the wind blew. She was a hunter, a climber, a cuddler, a gorgeous girl with distinct symmetrical markings that made people look twice. And what a mouth! If you were falling down on the job of attending to her, she let you know in clear, ear-shattering yowls. She ruled the house with a paw of steel gloved in a tiny white foot. Exactly the kind of kitty to steal, and break, my heart.

Grief, for all its complexities, is at heart the measure of our love. I am grateful for the love.