Under the Super Blue Blood Moon 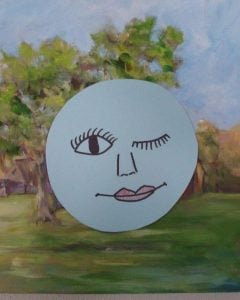 Once (or twice) in a Super Blue Blood Moon

This week I had planned a blog in honor of that rare triple event, the Super Blue Blood Moon. The idea went sideways Wednesday afternoon when Bruce found a house prospect in Walla Walla, WA. We met with our realtor Thursday morning at 10:30 AM, walked through the house, examined the exterior and the grounds and thought “Hmmmm.” The realtor told us to go have lunch and think some more. A chef salad and tuna sandwich later, we decided to make an offer.

We’ve been looking for a house for two years, in three different cities. Walla Walla (twenty miles from our present home in Prescott, WA) is a dandy small town with three colleges, dozens of wineries and loads of interesting history. An additional selling point: it’s a short distance to move our pets. Also, we won’t have to look for new health care providers, new grocery stores and the rest of it.

Premonitions abounded before we looked at the house. As I was falling asleep the night prior, I thought to myself “This might be it.” The realtor, after working with us for two years, had a strong feeling the house would work for us. Bruce took the money market checkbook in the event that we’d need earnest money. Turns out, we did.

Now we’re waiting, not too long because the offer expires at 9 PM today. It’s hard not to anticipate the sellers’ decision and start making a list of the things we’d need to do before we move. Number one is a cat-proof fence. The yard is overgrown. Trees need to be trimmed and a wood-burning fireplace converted to gas. There’s moving to consider, especially getting the feral cat relocated and settled.

And if it doesn’t work out? It’ll be okay. We love our present house, it’s just that we’d like to move into town. The drive to and from Walla Walla for groceries and appointments will be doable for some time to come, but it would be nice if. . .

Well, we’ll know by the end of the day.

In the meantime, the last Super Blue Blood Moon that was visible in North America happened March 31, 1866. H. G. Wells, Ann Sullivan and Butch Cassidy were born that year; Chief Seattle died. Andrew Johnson, a Tennessee Democrat, was President of the United States. The vice presidency was vacant. Post-Civil War Reconstruction was prominent on the national agenda. Tensions ran high between the Southern Democrat president and the Republican majority in Congress. In 1868, Johnson was subjected to impeachment proceedings. Much of this had to do with Johnson’s attempt to get rid of Secretary of War, Edwin M. Stanton (a Lincoln appointee), in defiance of the recently passed Tenure of Office Act. The House of Representatives adopted eleven articles of impeachment detailing Johnson’s “high crimes and misdemeanors.” The House formally agreed on the articles and forwarded them to the Senate. Johnson ultimately skated,the Senate falling one vote short of the 2/3 majority required for impeachment.

I’m convinced that life moves in a spiral. One house or the other, not so different in the big picture. Super Blue Blood Moons separated by 152 years- -very much the same. The USA political scene appears to be repeating itself. Only the players have changed.