Unusual Days (and Nights) with the People Inside 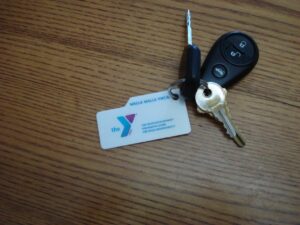 Unusual for me to not only join the YMCA, but to engage in strength training.

Do you ever have a string of days when unusual things occur? That’s what my week has been like so far.

Are you sure, Lily? What about me doing a circuit on weight machines on Monday?

Oh.  That. Fitness stuff is boring.

To you, 9, maybe, but for me it was a lot to absorb. Strength training is one of the reasons I finally decided to get a membership at the YMCA. On Monday I had a Fit Start appointment with a kind young trainer named Madelyn, who showed me how to use all kinds of different machines to strengthen different muscles. I felt like I’d been suddenly thrust onto a spaceship and tasked to learn a bunch of mission-critical routines. Must have been all the stainless steel and black upholstery.

I made it through the circuit, learned how to adjust the machines and did a few repetitions on each to get the feel of it. Madelyn wrote machine settings and routines for me on a formatted sheet of paper. She said I should take rest days between sessions. I was already feeling the abbreviated workout in my muscles so that was fine by me.

On Tuesday I returned to the Y for lap swimming. Nothing unusual there, just adding the planned extra lap to increase my stamina. I decided to reward myself afterward with a few minutes in the sauna. The sauna is in the women’s locker room and the information signage by the door says to remove all clothing and to shower before entering. I was a little shy about this but ventured forth, doused with cold water advertised as hot and wrapped in a very large towel. Yes, I would do this!

When I opened the sauna door I saw something unusual indeed.

There wasn’t a guy in there, was there?

No, Lily, it was stranger than that. An elderly women, dressed head to toe in a long-sleeved sweater, pants, shoes and socks was seated on the lower bench, the rubber tip of her cane resting on the floor between her feet. Wearing a bathing suit into the sauna if one was modest or shy I could understand, but. . .How on earth could she survive in there, dressed like that?

I kept my towel on, seemed like the neighborly thing to do, and we had a lengthy chat about how the heat really helped her arthritis and how she’d had to give up her driver’s license. Finally she looked down at her enormous black wristwatch with a huge digital display and said, “Eleven o’clock. Guess I’d better go and meet my ride.”

Alone, I loosened my towel and leaned back on the bench, absorbing the surreal experience.

Later that day I stopped by a local nursery to ask about landscaping services. My front yard is like the front yards of many places built 70-ish years ago, a botanical mish-mash of styles selected by different owners from distinct historical eras. I made an appointment for someone to come by my house, see the yard and discuss what I want to do (mostly remove a crumbling brick planter and add a couple of trees on the west side of the driveway to prevent the afternoon sun from desiccating the front lawn).

This is not an unusual thing for a homeowner to do, I suppose. But the name of the woman who would do the consultation was Susan. When I said this was my name, too, the only other customer in the office said she, too, was Susan. Cue the theme from The Twilight Zone!

Mom won’t let me watch that. She says it will give me nightmares.

All in good time, 9. Tuesday night we experienced an unusual meteorological event. The hot, humid upper 90s high toppled into the low 70s and we experienced an hour or so of thunder, lightning and rain. It happened again Wednesday night, for HOURS, a deluge from 8 PM to beyond midnight with thunder so violent it shook the bed and windblown rain pelting through the screen doors. There was a brief intermission for a double rainbow shortly before sundown.

I loved the whole thing!

Me too, Lily. Just goes to show that unusual doesn’t always mean bad. Hoosegow was pretty darn brave throughout, taking only a trip or two to the basement when the storm was at its peak. 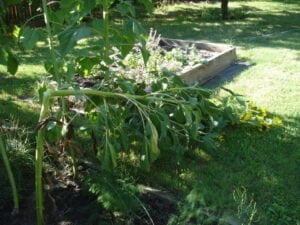 Wednesday night’s unusual and prolonged bout of wind and rain caused minimal damage in the garden. . .

On to Thursday morning I drove to the Y, nervous and excited because for the first time ever I would attempt strength training and lap swimming in the same session! Would I have the stamina to make it through? Would I even remember how to use the bloody weight machines?

Yes, and yes! The 12-year-old who was me, the wimpy girl who was repeatedly held underwater by the goalie when we played water polo in PE, made it to the finish line fifty years later! To top it off, I had the sauna all to myself afterwards.

There was one unusual thing, however. When I was in the locker room in between weights and swimming, there was one other Y member there. We introduced ourselves.