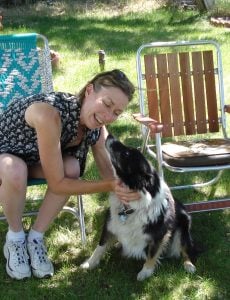 For the first time in three years, we’re taking a vacation. To many people this will sound completely un-American, but life is like that sometimes. At last we’re away for eight glorious days and seven relaxing nights, a car trip to northern California and Nevada to visit with Bruce’s wonderful cousins!

And, of course, Daisy. Daisy is an old friend of mine. We became well-acquainted in 2012, when Bruce and I stayed two months at the cattle ranch of John and Corinne Matley.

Daisy is a working dog, an alert and lively border collie, who, with relative newcomer Tom, keeps things running around here. Tom is definitely the junior partner in this enterprise. Daisy doesn’t stint on keeping him in line, especially when there’s an opportunity for petting.

And did I mention Daisy is drop-dead gorgeous?

We are incredibly lucky to be staying in an 1887 ranch house in the foothills of the Sierras, the air warm and soft, the atmosphere quiet except for the occasional passing train. Tall, mature trees shade the lawn at the warmest times of day. Everywhere we look there’s beauty- -rugged mountains, hay fields, pastureland, sagebrush clinging tenaciously where humans have not made their footprint.

The ranch is a few miles south of the very small town of Doyle, California. I’m not certain of the population, but Doyle can likely boast more citizens than our present home of Prescott, Washington (300 souls, +/-).

Reno, Nevada, is about 40 miles away. We’ve been there twice since arriving on Monday. We’ve visited both the living and the dead in Reno, starting with an emotional trip to the cemetery where four generations of Matleys rest. The next day, Cousin Kathy hosted a delicious lunch in her beautiful new home and Cousin Ellen provided the best lemon bars I’ve ever tasted for dessert. We’ll be seeing more of the family Friday evening, by which time we’ll start feeling melancholy, what with the return trip home the next day. Reno, itself, is in a high growth phase, a true comeback after the recent recession. Bruce barely recognizes it as the small city of 50,000 he grew up in.

Trips to see family and hometowns can’t help but be a mixture of the familiar and the new. It’s been three years since our last visit. No person or place stands still in time, space or, annoyingly, age. The reality of where you’re from conflicts with how you remember it.

Except, of course, for Daisy.