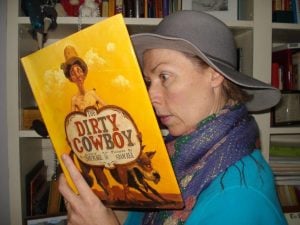 This week I read a Facebook post that set me thinking- -not about a turkey wrapped in bacon or what classic movie star I am most like, but something truly critical to the way we live in the 21st century. I’m talking about the singularity movement, the point where humans and machines merge and the line between organic intelligence and artificial intelligence is blurred.

“Something shifted in our family Sunday, and apparently we’re not alone. It began with a little cardboard box, tucked for free into the Sunday NY Times. Low-tech and innocuous, just add an iPhone – and BOOM this box becomes a virtual reality experience. I didn’t think I would fall for VR, even after high tech festival demos, and I was sure my technophobe daughter would be immune. Yet within minutes…our family was wrestling over this little cardboard box like a pack of baboons with a single breadfruit.”

If you can’t quite picture the “little cardboard box” Jessica received, let me help you. It’s called Google Cardboard. If you’re an antique fancier, it looks kind of like a stereopticon or a View-Master and promises “immersive experiences.” If you still don’t get it, here’s a link: https://www.google.com/get/cardboard/

Jessica goes on to relate that her 9-year-old became entranced by “The Displaced,” an account of three children made refugees by war. She then pondered how the ever more realistic digital worlds will change kids, especially digital worlds filled with violence.

I wonder- -even worry- -about that, too, and today a related thought came to me: what would the world be like if fiction fans could enter their favorite books instead of reading them?

First I recalled my own childhood fantasy. I was reasonably certain that I’d be magically transported to the Narnia of C. S. Lewis and kept a bag (stocked with a bar of soap, a washcloth and I’m not sure what else) handy in anticipation of the happy event.

It hasn’t happened yet. But fifteen years later I saw the IMAX movie, Cronos. The film, which gorgeously revealed the world, its history and its development at an increasingly breakneck speed, left me in awe, but the physical world of the IMAX theater at Balboa Park in San Diego, CA, created a sensation I can only describe as supernatural. The screen, I soon realized, extended to the floor of the seating area and I felt not merely surrounded but engulfed by what I was watching. It was me, not a camera crew, soaring over the earth.

I left the IMAX theater dazed and stayed that way for the rest of the afternoon. Thirty years later, I wonder if I would survive entering a favorite book. Would it be like the holodeck in Star Trek, where a dangerous moral lesson lurks in the virtual world? Would I be happy with the role I chose or was assigned? Would I see the whole story, or only the scenes where my character was present? Would I remember the plot, or would memory be lost as I became immersed in events as they unfolded? Do I really want to merge with all this stuff?

I don’t know, but I think I’ll pack a bag for Narnia, just in case.