VISA and the Man 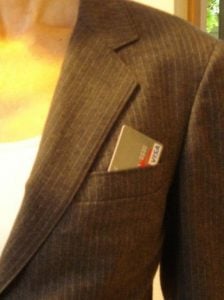 1985. I was in my employer’s break room, reading an article about women in public accounting in a trade magazine. According to the article, 80% of female CPAs at that time were 26 or younger. Young women were entering accounting profession in unprecedented numbers and I was one of them.

My employer, Peachtree and Allen (not their real name), took a progressive stance on this emerging workforce trend. Half of their new hires were female, including one woman “of color.” Several women in the firm had risen to the rank of manager and one of the female audit managers was rumored to be on a partnership track.

But every brave new world has its share of Neanderthals. There was one in particular, a native of Montana in his mid-20s, who was prone to using the unfortunate phrase It’s a man’s world.

I first thought to ask him “Which man?” but figured he wouldn’t get the joke. Besides, he was my supervisor on an audit engagement. I didn’t want to stack up too many points for being a smart ass when it the time came for my evaluation. In my mind, I started calling him the Montana Kid (or the Kid, for short).

The Kid was prone to stating his passing fascinations out loud. On our current engagement, the audit of a non-profit youth organization, he asked the hard-as-nails bookkeeper how she could apply her lipstick perfectly without the aid of a mirror. The woman was in her mid-50s and after knowing her for about a minute it was clear she took no guff from anybody. She sneered at the Kid and said, “Years of practice,” looking as if she’d just as soon knock him to the ground as answer him.

Mrs. Lipstick’s style was more taciturn than mine but I gleaned something worth emulating when dealing with the Kids of this world: to take no crap.

“She’s a tough old gal,” the Montana Kid remarked later. “Gal” was not a word Peachtree and Allen encouraged, and men decades older than the Kid were struggling to erase such nouns from their vocabularies for fear of getting sued for sex discrimination.

In the Man’s World of the Montana Kid, there was no such concern. If we passed a buxom, blonde woman while trudging Seattle’s streets between the client’s place and the Peachtree and Allen office, he’d remark, “She’s a turner!” At first I thought he was referring to a style of painting. I was relieved when he restored consistency to my perception of him by explaining he meant a head turner. This is also how he described his own sister (who still resided in the Man’s World of Montana), with a creepy degree of relish.

“Whoa, nice rack!” he exclaimed on another such occasion. His target, a tall, well-endowed brunette, scowled nastily, squared her shoulders and doubled her pace to get away from us. My face was already crimson with embarrassment for this idiot; I must have turned purple when he added, “She acts like she’s offended but you can bet I made her hot.”

If I’d had the life experience of Mrs. Lipstick, I might have said something like, “Put a lid on it, dumbbell.” Instead, I almost felt sorry for the primitive. Did the Montana Kid suffer from some sort of mental disorder that forced his internal monologue into audible speech? There had to be something wrong with him- -otherwise, why would he think I was the right audience for his vulgar remarks? But what really stumped me was how he’d survived three annual reviews at Peachtree and Allen without someone sitting on him for gross conversational blunders.

The Montana Kid didn’t seem aware that he was surrounded by a revolution of change, though most people in the public accounting world- -men and women alike- -were feeling their way through the uncharted territory of gender parity.

It was hard for me to understand, at first, what a struggle this change was for the world at large. I grew up in a family with two girls and no boys. Both my sister and I had been told all our lives that girls were as smart, and often smarter, than boys. It was clear by the time we started high school that we were expected to make our own living after college. Of course I realized women often didn’t get paid as well as men did for doing the same work, likewise that they were more likely to be overlooked for promotions. But this I took in stride, figuring such a benighted way of conducting business would go the way of the dinosaur by the time my career advanced far enough for it to become a personal issue.

What I didn’t realize was how the lack of gender parity in mundane day-to-day matters could make a woman’s life difficult; matters such as getting a major credit card.

My ex-husband and I had made all our major purchases with cash, with the exception of taking out a mortgage for a house. After the divorce I’d started building a credit history, without which it had been difficult to get something as simple as a telephone line in my name. J. C. Penny’s credit card was easy to come by and I was also able to get a Sears card. Making purchases and payments on these was a start, but the cards were only good for purchases from their stores or catalogues, not for goods and services in general. When I’d built up a six-month history with these minor-league cards I applied for a VISA card at my bank. My credit history wasn’t considered sufficient and I was turned down. Working at a Big Eight public accounting firm apparently wasn’t enough to tip their decision in my favor. I was disgusted to learn in a staff room conversation that a man three years my junior who’d started at Peachtree and Allen a few months after me had encountered no problem whatsoever in getting a VISA card from that very bank.

I tried to sit still and “be good” about this inequity. I applied again a few months later, again without success. I grew frustrated at being denied, in part because of the presumed inequality, but also because having a major credit card would soon be a business necessity. The longer I worked at Peachtree and Allen, the greater the chance I’d be sent on an out-of-state audit. Sometimes auditors had to cover some of their own expenses up front and submit an expense report for reimbursement when they got back to Seattle.

One Friday morning, when I’d been at the firm for a year and some months, Werner, the office manager, told me I’d be flying to San Francisco on Sunday. Peachtree and Allen paid for plane tickets and hotel but I was expected to pay for one week of meals and ground transportation out of pocket, to be reimbursed the week after my return.

At lunch time I rushed to the nearest branch of Mountain Bank (not their real name) and emptied my savings account, hoping the few hundred dollars would be enough to see me through a week in a vast, expensive city. The branch, just down the block from the Peachtree and Allen office, was also home to the bank’s Commercial Banking Center. I’d worked on the CBC audit the month before, a dreary engagement that involved reviewing file after file of collateral documents written in extremely fine print. After I’d raided my savings I turned away from the teller cage and peered across the vast lobby. The CBC manager was at his desk in a distant corner. I tucked the bills I’d withdrawn into my wallet, strode across the lobby and seated myself in one of the two vacant chairs that faced him.

Mr. CBC looked up from the file he was perusing, his expression polite but questioning. He closed the folder, slid it to one side and asked if there was something he could help me with.

This information replaced his questioning expression with one of slight annoyance.

“It’s a personal financial matter I need to discuss,” I continued. “Peachtree and Allen is sending me on an out-of-state audit and it’s imperative that I have a major credit card for travel expenses.”

“Any of the tellers can give you an application,” he said patronizingly, as if I were too dense to know how to start.

“I’m aware of that,” I said. My smile tightened. I hoped the irritation boiling inside of me hadn’t jumped to my eyes. “I’ve applied for a VISA card from this bank twice, and have been turned down twice.”

“The extension of credit is a very serious matter,” he parried with a sneer. “So many young people don’t know how to manage credit, once it’s granted.”

Who did he think he was, my dad? I’d had my own pinstripe suit long enough not to be intimidated by someone approximately my age in the same costume.

“I’ve been employed by Peachtree and Allen for over a year,” I said. “I’ve had checking and savings accounts at Mountain Bank for over five years. I’ve established flawless credit history with my landlord, the telephone company, and with J. C. Penny and Sears credit cards.”

He nodded to show he followed my words, though his smirk deepened. Was my voice growing shrill? Was I coming off like a stereotypical, hysterical female?

Suddenly, I thought of Mrs. Lipstick. An internal mechanism clicked as I pictured her suffer-no-fools cool. My vocal register lowered.

“Doesn’t it seem odd to you that, while I’m considered responsible enough to audit this institution, I am not considered a good risk for one of its credit cards?” I leaned forward and dropped my tone a fraction lower. “I’d hate to think the denial of credit had anything to do with- -I don’t even like to speculate about this, but- -does this have something to do with sex discrimination?”

Our eyes locked. His smirk vanished. I crossed my arms, leaned back in my chair and waited for his reply.

After a seemingly interminable tense moment he smiled flatly and retrieved a blank credit card application from a desk drawer.

“This isn’t really my department,” he said, sliding the form across the desk top toward me. “It’s possible you’ll be approved this time, but don’t expect much of a limit.”

He waited, drumming a pencil on the top of his desk while I completed and signed the form. When I handed it back to him, he quickly scrawled his initials in one corner and walked it over to one of the tellers. When he returned to his desk I stood and extended my hand.

“Thank you,” I said with amplified courtesy.

“I can’t promise anything.” He barely gripped my hand before he let it go.

“See you at next year’s audit.” I savored the fleeting look of discomfort that flashed across his face.

When I returned from the week-long audit in San Francisco, a shiny new Mountain Bank VISA card with a 500 dollar limit was wedged into my crammed-full locking mailbox. After three months of light usage the limit was mysteriously and abruptly raised to 5,000 dollars. Was this right? Was this reasonable? Maybe I didn’t understand much about how the world worked, but, thanks to Mrs. Lipstick, at least I’d learned something about how to work the world.