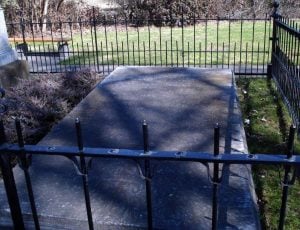 The Great Grave at Waiilatpu Mission, aka Whitman Mission

Usually my weeks follow a predictable pattern. I work on writing projects Monday through Friday, catch up on odds and ends on Saturday and clean house on Sunday. Maybe it’s because it’s spring, a season known for unpredictability and change. That’s certainly true of the recent weather- -torrential rain interlaced with high winds and clear, sunny skies. Whatever it is, this week in particular has been a wacky week.

Part of it is writing related. I’ve been spending a lot of time in local museums and archives, searching for odds and ends about my Living History character Matilda Sager Delaney and a related novel about Whitman Massacre survivors. Wacky Week started on Saturday, when I visited the Whitman Mission Historical Site, 7 miles west of Walla Walla. The mission is one of those amazing settings where you can still feel what happened, the way I remember feeling at Little Bighorn Battlefield when I was a kid. It takes no imagination at all to sense the presence of the missionaries, the emigrants, the Cayuse walking alongside you as you survey the mission grounds, the dimensions of long-gone buildings outlined in concrete. Haunted, yet peaceful. 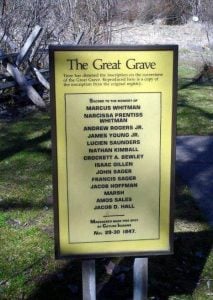 The wacky element of my visit to the Whitman Mission was a lengthy conversation with the head ranger. What started with a simple question (where were they butchering the steer the day of the massacre?) led to other questions to cement my understanding of the time, place and movements of the people involved. As a bonus, the ranger sent met a scan of a map of the mission, drawn by a contemporary of the Whitmans in 1843. Wacky in a good way.

The Living History season kicked off on Sunday, so after I deemed the house clean enough I went to the opening presentation at Fort Walla Walla Museum. It was partly in support of the presenter but also research, in the sense that I wanted to see how he approached his character, how many people were there, what the setting was like, etc.

That wasn’t so wacky, but it was raining like mad when I left the museum and headed to Home Depot. My mission: steer manure. Believe it or not, the soil at the “new” house is totally depleted of nitrogen! This is quite a jolt, after eleven years living amidst wheat fields where fertilizer, hence nitrogen, abounds. As the sales clerk rang up my purchase I told him I was, or would soon be, the Queen of Steer Manure. He seemed to take this seriously.

It was raining even harder when I returned home, hefted the bags into the back yard alongside the first bed I needed to amend and proceeded to work the manure into the shockingly depleted soil. The rain didn’t stop. Neither did I.

Tuesday, I had coffee in the late morning with my cousin, Carla. It was fun. But for me, fun in the middle of the week is wacky. When I got home, there was an email from the Columbia County Historical Society (Matilda Sager lived in Columbia County in the 1880s and 90s) with oodles of files attached about Matilda and life in Farmington, WA! Another wacky good thing.

Did I mention Tuesday morning? That’s when I received an email, inviting me to write, in 100 words or less, What Western film would I like to see staged as a theatre piece, and why? The editor of Roundup (magazine), published by the Western Writers of America, had recommended me. Nice! Not to mention, wacky. . . . If they like my piece, it will appear as a sidebar to a lengthier Roundup article about contemporary westerns on the theatrical stage. Issue date? I’ll keep you posted.

Wednesday was centered on a trip to the Whitman College Northwest Archives. An efficient and friendly young man named Joel pulled a box from the Sager Family collection for me, in which I found typewritten copies of actual letters Matilda Sager Delaney had written when she was in her 20s. It was fascinating to read her feelings surrounding the death of her first husband (she adored him) and the gradual transition to her decision to marry his business partner (“a good man”) a few years later.

Remember my earlier antics with steer manure? Yesterday, I completed that particular piece of the back yard renewal project. My plan was to transplant two languishing blueberry bushes that were planted far too close together (and, as I learned last week when I was testing soil, starving for nutrients). The first one was easy; the second one lent considerable dramatic tension to my afternoon, as it was totally root bound, as if someone had taken it out of a too-small pot and baked the roots in a microwave before planting. There was mulch and I’m not sure what packed on to the root ball, so hard that I had to soak the roots in a bucket of water to even begin loosening them. Poor bush! It finally went in the ground about two hours later. Definitely wacky. 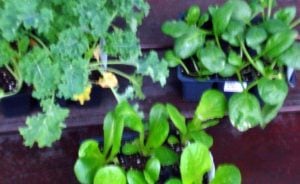 Next up: planting greens. Hopefully their roots are reasonably free!

It’s been raining so frequently there hasn’t been much of a window to mow, and, though I have two gas-powered push mowers (a story in itself) I’m pretty sure they went through the winter without being drained. Learning how to maintain lawnmowers, while I will tackle it eventually, is not at the top of my list. To my delight, the old push mower works! It has nostalgic value, too, takes me right back to helping my grandpa mow his yard when I was a kid, back when it felt like fun instead of work.

Sometimes I’ve felt overwhelmed by all the new responsibilities I’m taking on since Bruce died. The newly awakened and wacky memory of dashing across Grandpa’s lawn, the mower blades whirring in front of me as I hollered Wheee! is a good antidote for that overwhelmed feeling.  That’s my approach for springtime: wacky week or regular week, I’m determined to make it feel like fun!