Stratego! and Walking the Walk 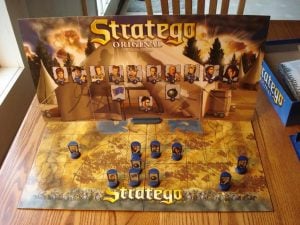 The start of a new year is often a time of renewal and reform. I am not going to resuscitate the stale resolutions of keeping my shoes polished and reading my writing industry subscriptions in a timely manner, having faced the fact that those particular horses dashed from the barn long ago. For 2016, I’m on to something bigger and better. That’s right, I’m going to become an expert at the board game Stratego!

If you’ve read Small-g City (my novella! Look at me! Look at me!!) you may recall that James Ares Smith, counselor to the Pacific Northwest structurelings, enjoys a rousing game of Stratego! now and again, and that Veronica plans to buy it for Zeus on his next birthday. Spoiler alert- –Stratego! rates a mention in the sequel and will have a critical role in book three. It’s high time to walk a mile in Jim Smith’s size 18 Doc Martens and get my head wrapped around this game.

Why do I even know about Stratego! ? This game of strategy (surprise!) was heavily advertised on television when I was a kid, especially in the run-up to Christmas. The playing pieces more-or-less resemble British and French soldiers during the Napoleonic era. We never owned the game, but I used to play it at a friend’s house. Not that we followed the rules; we mostly did that kid thing where you use the game pieces to make up your own stories.

But James Ares Smith plays strictly by the rules, and Zeus does, too (well, kinda). As a writer, it’s my responsibility to learn the details and nuances of the game. Work, work, work. My husband bought me Stratego! for Christmas. So far, we’ve read the rules and affixed the decals on the eighty-two playing pieces. I know it will take tons of resolve and personal discipline, but I’m determined to become a top-notch player. By next Christmas we’ll probably be playing in tournaments; there are national and world championships, according to the Stratego! website http://www.stratego.com. Air fares alone are going to be massive, so I’d better get back to work and- -what is it I do for a living again?- -oh yeah, write!