What I Did On My Armchair Time-Travel Vacation 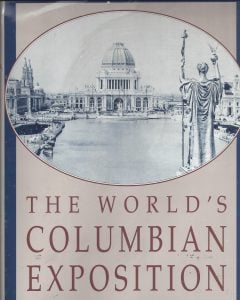 I’ve been on the road a lot lately. The road is in my head and the destination was suggested by my great-grandma, Mary J. Patterson. In 1893, at the age of nineteen, she boldly boarded a train in Portland, Oregon, and, without a chaperone, traveled to Chicago for the Columbian Exposition.

The Exposition, also known as the Chicago World’s Fair of 1893, commemorated the 400th anniversary of Columbus discovering America. Dedicated in October, 1892, the fair opened the following May. When it closed in October 1893, 27.5 million people from around the world had passed through the gates.

The fair was famous for scale and ingenuity. Artificial canals and lagoons were dredged (using shovels, wheelbarrows and a lot of muscle) in Jackson Park on the shore of Lake Michigan. Fourteen Great Buildings, thirteen of which were temporary, composed an area nicknamed the White City. The facades of these buildings were finished with a heavy-duty stucco called staff (made to look like marble), and all but one were painted white. Massive statuary decorated the grounds and buildings throughout. The visual impact of the White City inspired author L. Frank Baum, a frequent visitor to the Columbian Exposition, to create the Emerald City in The Wizard of Oz. Elias Disney, father of the yet-to-be Walt, was a construction worker on the fairgrounds. Some surmise that his remembrances of the Columbian Exposition fueled Walt’s vision of Disneyland.

Speaking of which, a short description of the Columbian Exposition could be “Disneyland on steroids.” Every invention of humankind was displayed in the vast exhibition halls. Technology was evolving rapidly and entire buildings were dedicated to Transportation, Electricity and Machinery. The Manufactures and Liberal Arts Building by itself encompassed 31.5 acres. A revolutionary first, The Woman’s Building, reflected the increasing role of women in politics, invention and the arts.

All U. S. states and territories, plus 51 nations and 39 colonies, participated as exhibitors. Replicas of Columbus’ ships, the Nina, Pinta and Santa Maria, were built in Spain and sailed across the Atlantic for exhibit at the Fair. Norway sent a replica of a 1,000-year-old Viking ship. A full-size replica of the U. S. Battleship Illinois, appearing to be a floating attraction, was, in fact, built on a concrete foundation.

Music of all types was readily available. Bandstands abounded. The Choral Hall held a 2,500 member choir that performed several times a day and the Music Hall offered daily orchestral concerts.

The mile-long Midway Plaisance, technically not a part of the Fair but joined to it, also rang with music. Temporary castles and villages from all over the world, staffed by foreign folk who lived on the grounds for the six month run, lined the midway. Exotic foods and entertainments abounded, including belly dancing and the original Ferris Wheel- -264 feet high with 36 railcar-sized cabins that held up to 40 people, each. This daring creation was the Columbian Exposition’s answer to the Eiffel Tower of the 1889 Paris World’s Fair.

The list goes on. If you’d like to take your own armchair tour of the Columbian Exposition, I highly recommend The Chicago World’s Fair of 1893, The World’s Columbian Exposition by Norman Bolotin & Christine Laing © 1992. Their “A Week at the Fair” section makes this book a stand out. For an excellent read about the creation of the fair, plus a chilling account of a Chicago serial killer, try Erik Larson’s The Devil in the White City © 2003. Safe and happy travels to all who undertake this adventure!