Winter and the People Inside 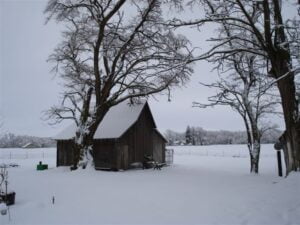 Winter 2008: the barn at our former home in Prescott, WA.

If you’re like me, today you are feeling as if winter will never end. It’s sobering to look back to the start of it, December 21, 2021, a mere 19 days ago. That means it’s officially, let’s see, how many more days until it ends?

There are other fun ways we can monitor the demise of winter. For example, today in Walla Walla we get 1 minute and 19 seconds more daylight than we did yesterday! And. . .well, after that I’m not so sure.

That one confuses me, what it means if the groundhog does or doesn’t see its shadow.

The event is the groundhog coming out of hibernation, 9. If it sees its shadow, meaning the sun is out, it’s a portent that there will be six more weeks of winter. Accordingly, the groundhog resumes hibernating.

Looking at the 2022 calendar, that would mean the winter weather ends March 14.

What a rip off! That’s only one week earlier than the official start of spring.

Let me make a quick query. Ah, here it is: if the groundhog doesn’t see its shadow, meaning the sky is cloudy, an old Pennsylvania Dutch superstition says spring will come early.

Ditto. No wonder I get confused!

Moving right along, we also have Daylight Saving Time on March 13. That one’s easy to remember, anyway: Spring Ahead.

Lots of people are asking that question these days, 9. Let’s look at some history to get a bit of perspective.

The concept of daylight saving time had been around a long time before it was first used for practical purposes by the German Empire during World War I. In 1916 the Empire set clocks ahead one hour in an effort to use less power for lighting, to save fuel for the war effort.

In the United States, daylight saving time was first used in 1918, established by a bill introducing the idea of a seasonal time shift.  After seven months the bill was repealed. Daylight saving time returned to the US during World War II. President Franklin Roosevelt re-established the adjustment, now referred to as “War Time.” War Time ran from February 1942 through the end of September 1945.

The Uniform Time Act of 1966 brought the idea of a yearly seasonal time change.  Under the Act, daylight saving time began the last Sunday in April and ended the last Sunday in October. In 1973, during the oil embargo, congress ordered a year-round period of daylight saving time to save energy, running from January 1974 to April 1975. Since the plan did little to save energy the U.S. switched back to standard time.

Right now, many states are contemplating a permanent shift to daylight saving time. To me this makes sense, as we’re in no way controlling when the sun rises and sets, we’re simply pretending like we do. 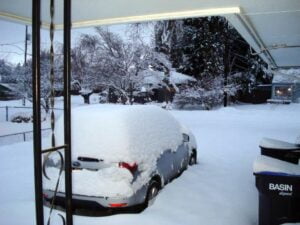 I’ve always thought of daylight saving time as a holiday. Sometimes it’s good to throw a little confusion into the mix to keep people on their toes.

I don’t care about it one way or the other. When you’re nine, you don’t get a say about much so why bother?

That’s an interesting observation about a holiday, Lily. I do have a daylight saving time ritual- -that’s the day I replace the house’s smoke alarm batteries. 9, I sympathize with your indifference to forming opinions about things you can’t control, but just for the mental exercise why don’t you consider the benefits and detriments of government-mandated time changes?

Okay. Now I have a challenge for you: let’s get to work on those truffles everyone gave us for Christmas.

I can see my way clear to a couple of those today, 9. Sweets have been on my mind since yesterday, when there was a thin layer of ice covering the snow. Breaking through it step by step felt like plunging a spoon into the hardened caramelized sugar on top of crème brûlée.

Whatever experience the winter brings, Lily, 9 and I wish you safe travels. And remember, spring is on the way!