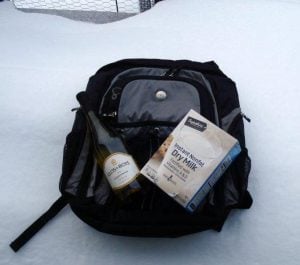 Decision, decisions: an argument for Palcohol.

If you’re like me, you’re an absolute coward about driving in the snow, though last Friday we had a day so warm, and so much snow melted, that it turned even scaredy-cat me away from the bus stop and back home for the Subaru because, hey, I was nearly out of toilet paper, dog food, cat food and wine.

Let’s face it, canned and liquid goods are a pain to schlep home in a backpack. For example, a gallon of milk weighs approximately 8.6 pounds. However, there’s an easy fix for milk- -powdered milk! Don’t make that face. No, really, don’t. Powdered milk may taste substandard to the real(er) thing, but it has two great advantages for the near-snowbound:

In these trying times, I can live with powdered milk.

Dog food, cat food and toilet paper are not only big ticket items in my household budget, they are also just plain big. A small sack of cat or dog kibble takes up the entire cubic interior of my backpack. Fortunately, last Friday’s snow respite permitted a quick trip (driving my car like a big girl) to the grocery store. With tremendous glee I loaded up a shopping cart, not a mere basket with the accompanying agony of constant assessment as to whether I could carry my goods all the way home. The car also solved the wine problem (read: liquid in a heavy glass bottle). But it got me to thinking: if we have such a thing as powdered milk, why not powdered wine?

Mom (who has braved Western Washington’s freaky amount of winter snow) thought this was a great idea. “Invent it!” she said with gusto. “You’ll be a millionaire!”

Turns out, somebody already made that million. Powdered wine has, in fact, been invented. The types I’ve found online appear to be alcohol-free. The hook: powdered wine is intended for cooking. You get all the flavor of wine without the alcohol. I’m sure the invention or powdered wine makes Julia Child spin in her grave. My own suspicion: it probably tastes like TANG.

But take heart, there really, truly is a powdered form of alcohol, called Palcohol (sounds friendly, doesn’t it?). Palcohol has been approved for sale in the United States, at least in theory. The sale of Palcohol is, as of 2016, banned in 34 states (including Washington State, where, among other things, marijuana is legal). What’s the big concern? The usual stuff (kids getting into it, teenagers abusing it), plus the added concern that some genius will decide to snort it (a quick search of the internet reveals that this has already happened). Though I’m okay being denied retail access to Palcohol, I’ll admit it would be interesting to sample a shot of reconstituted vodka or rum, purely for research purposes.

And hey, powdered milk might be the perfect mixer!