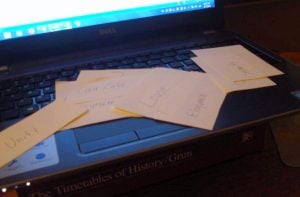 A word about ten particular words. . .

That being so, I have a great suggestion for the American film industry. Let’s dream up some blockbuster movies using different combinations of these most recognized words as titles:

Now, let’s whip up a few marketing blurbs for our newly titled movies:

A wingless parasitic insect who is a hotshot marketing executive vows all-out war on a mom-and-pop soft drink concern in a remote corner of Australia!

A contemptible person finds love and a huge pan of brownies in this heart-warming musical, set in an aphid-infested rose garden. Lyrics and music by Jerry Herman, book by Michael Stewart!

Their love began with a misaddressed Candy-Gram ®; will it end with a case of responsibly sourced cacao?

Enough with the movies. New topic: I wonder, what five words would make a truly positive impact on the world today? According to the website http://positivewordsresearch.com/beautiful-positive-words/, the five most positive words in the English language are:

These, as you can readily see, are not the stuff of movie titles. Well, okay, maybe Giggle. Can you remember the last time you used any of these words in a complete or partial sentence? Me neither. But maybe there’s something to be gained here. How would you feel if someone described you as effervescent, or complimented you on your eloquence? Pretty good, I bet. And serenity- -isn’t that something we all long for, especially when there’s no chocolate to be had?

Giggle. Try that one on for size. Tickles, doesn’t it? Kind of makes your eyes light up and your heart, too.

The definition of Unity is simple yet it’s a difficult word. Meaning: a state of being united or joined as a whole; also, in mathematics, the number one. Maybe the difficulty sets in when the mathematics definition gets mistaken for the other one. Number one- -that’s me, right? What, you think that’s you? Don’t make me laugh! If we’re going to achieve a state of unity, clearly it’s me who will be in charge.

Actually, I hate being in charge of things. But I do enjoy playing with words. Just this minute I’ve written the ten special words noted above on slips of paper and put them in two piles, one for the most recognized words and one for the positive words. With the assistance of Bruce Matley, one word has been randomly drawn from each pile to create five new word combinations. Ready?

The Giggle: Hmmm, this one might make a good movie title (see above); also, the name of 5-star hotel-style apartments in Falmouth, UK- -seriously!

Happy word play and wishing you a Coca-Cola Effervescent weekend!