Working Together and the People Inside 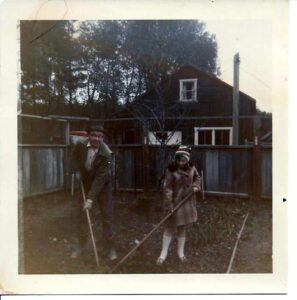 Working together with Grandpa Denny Sullivan in his garden off MacPherson Street, Port Townsend, WA, c. 1967.

Greetings! This week’s blog is being written without knowing the outcome of the 2020 presidential election. But one thing I do know: there is a critical need for all of us in the USA to engage with each other and start working together.

Yes, we’re a well-oiled trio, Lily (my inner 14-year-old), 9 (ditto, but 9 years old) and me. It’s relatively easy to work together when you’re all the same person, albeit from different ages and perspectives. We have different interests sometimes, too. At present, it’s quite handy that we agree politically. All three of us are Democrats. In fact, 9 was passionately involved in the 1968 presidential election.

Just wait, 9- -history will vindicate you. I know it’s hard to wait for things to come out right sometimes. You wouldn’t believe how spoiled we Americans are these days, expecting everything to be tabulated and known instantly. And as far as sitting down together to solve problems- -sad to say, lots of people who are, or more sadly have been friends, aren’t talking to each other right now.

I’m still mad at the kids in Mrs. Morton’s room who voted for Nixon in the straw poll.

Understandable in your case, 9, because you’re only 9 years old. The world is easier to see in terms of totally good guys and totally bad guys when you’re that age. But is it really right to get mad at your classmates because, for what they considered to be the right reasons, they picked a different candidate than you?

But it’s so frustrating! I mean, I don’t understand how they can be so stupid!

Believe it or not, 9, that’s the way a lot of grown-ups are acting right now, in November 2020. As I’ve already stated, I’m a Democrat and have voted accordingly.

Of course you did, because you’re smart!

No, Lily, but I wish I was. There’s no mandate involved this time. We’re pulling against each other as we never have before and forgetting that, as people, we have more in common than we have in differences. It reminds me of a real-life work experience from the 1980s. Want to hear about it?

I was working as the accounting manager for a cemetery organization. Accounting was on the cautious end of our corporate continuum. Part of my job was to evaluate new projects from a financial point of view.

Just hang on, Lily, and pay attention- -you’re the one who tested high for algebra aptitude and got us into that particular line of work.

I would never! Accounting has absolutely nothing to do with being an actress!

Back to my story. At the riskier end of our organization was the sales department. The sales manager had all kinds of ideas on how to spend money to stimulate sales and he was constantly pushing against my analyses. He was a nice enough man, but in the workplace we were natural enemies. Our boss, the executive director, clearly enjoyed our arguments in the weekly management meetings.

One day the management team- -the executive director, the three cemetery superintendents, the sales manager and me- -participated in a planning retreat. The retreat was led by a facilitator and all of us, even the executive director, were treated as equals in this setting.Our goal was to develop a five-year plan. We started with a brainstorming session. Ideas were scribbled on flip charts in different colors of marker, pages torn off and taped to the wall to give us a full view of what was under discussion. When the topic of a new mausoleum came up, a pet project of the executive director, the discussion grew intense.

As envisioned, it was to be a Cadillac mausoleum, made of the best marble available and priced as an aspirational final resting place for a new breed of consumer called yuppies- -Young Urban Professionals, in case you’ve forgotten or never knew. A casket-sized niche would be priced about the same as a modest 3-bedroom house!

The facilitator asked each of it in turn for comments on this proposed project. Having drafted a preliminary project budget, I knew that financing the construction of the mausoleum was well beyond the means of the cemetery organization without taking on a vast amount of debt. Revenue projections into the future revealed that financing costs would make the project a profitless loser.

“We can’t buy it,” I said, looking guardedly at the executive director and correctly anticipating his pout. I then glanced at the sales manager, whose turn came next, thinking Take that!

The sales manager looked grim, “We can’t sell it, either.” From his knowledge of the local market, the proposed crypts would be priced well in excess of what people were willing to pay.

When our group broke for coffee the two of us put our heads together and determined that the executive director had been gaming us, deliberately fanning conflict between our departments for his own entertainment. And though the sales manager and I often had differing workplace opinions, we’d learned that we both were making reasonable proposals based on the needs of our own departments and our individual visions of where the organization should go. At last we were working together.

And then what happened?

Nothing spectacular, 9, but the experience made me aware that sometimes people in a position of power will manipulate others for their own gratification. Whether they’re your boss, your teacher, a family member or a public official you need to be aware that part of their joy in life is to put people at odds with each other.

My story is far simpler than what we’re facing now as a nation. I definitely think We, The People, are being manipulated from many different directions, by political parties who spread alarm to motivate us to make donations, by the media who are addicted to the non-stop news cycle and post any splashy headline they can find to grab the public’s attention, to the candidates and their surrogates who craft their campaign speeches to lock in our votes. Is any of this right? Maybe not, but when we fail to think critically about the information we’re receiving we are adding to the problem. If we take in all this information without questioning it, it’s easy to fall into the “Us” and “Them” categories the influencers are pushing us toward. Maybe it’s a necessary evil to pulling off an election, but what about afterwards?

I’m very concerned that this time Afterwards will find us split 50/50, firmly entrenched in the camps of Us and Them. This is neither sustainable nor healthy and we as individuals need to overcome it. When the election is decided we need to start working together and make the best of what we’ve got. None of us is going to get everything we want out of this. But, moving forward, if we listen to each other, treat each other with respect in spite of our personal and political differences, and work toward the solution of our common problems with well-reasoned and practical input, we might end up in a better place than we are today.

This sounds daunting, but we can start out simply, something like:

BECAUSE none of us is going to get everything we want out of the 2020 election. Please resist the urge to spin your wheels about what should have happened and use your life and energy wisely. Because–there’s a very thin margin between our success as a people and our failure.

I can do #2, no problem, especially after sitting through your story about working for the cemetery.

And, in case you were wondering, the executive director’s vanity mausoleum never did get built.