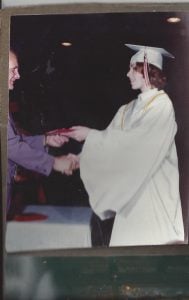 When I was a girl in the 1960s and 70s I was very, very lucky. My parents had two daughters and no sons. Though female, we were expected to go to college and be able to support ourselves when we got out, preferably in a profession. Whenever we started lessons or a project or joined a club, we were expected to do our best for the duration and to finish what we started. We were told to stand up for ourselves, and especially for the kids around us they described as “the underdog”- -ones without friends who became targets for bullies.

Sure, we were also expected to conduct ourselves like ladies, especially if someone were watching. We both knew how to cook and my sister learned how to sew. We were no different from any other kids when it came to keeping our rooms clean, a parental dictate answered with whining, moaning and the dragging of fast-growing feet. Learning how to sail was a family requirement. Though brotherless, we had a basketball hoop on the side of the house.

My point? My sister and I did both “girl” things and “boy” things without being required to draw lines between them. She became a teacher. I became an accountant (and, eventually, a bunch of other stuff).

Decades ago, at the height of my accountancy phase, my then-husband brought home a couple of guys for a beer after work. I’d never met these men before so we all shared a little bit about ourselves. One of the men asked where I worked.

He didn’t seem to like my answer. When he found out I’d graduated from University of Washington School of Business Administration he opined that college was wasted on women and not needed for the kind of work “they” did. He, himself, was a warehouse man. To his credit, my then-husband, who was glad I had a career-track job, shot me an apologetic glance and changed the subject.

It was not the first time I’d felt the brunt of sexism regarding my education and profession. At my previous job, accounting manager for Associated Catholic Cemeteries of the Archdiocese of Seattle, one of my female co-workers told me the day I started that she believed they shouldn’t have hired me- -management jobs should go to men with families to support. Had she known I only made a couple thousand more dollars a year than she did, maybe she would have revised her opinion.

Girls and women, disparaged by men and sometimes women for coloring outside the lines of tradition. It’s an old story and, unfortunately, new installments are written every day. I was reminded of this by a radio piece about girls and confidence. Apparently girls get shut down from pursuing traditionally male activities as early as age eight. This includes fairly simple stuff, like raising your hand when the teacher asks a question. Girls, more than boys, are expected to be perfect in all things, including appearance. Therefore, after a certain age (12? 13? 14?) girls are less likely to take risks and try something new: if they’re not perfect, they are failures.

News flash: Girls (and women) are not required to be perfect! Girls can make as many mistakes as boys, and learn from their mistakes. Girls do not have to apologize for being in the limelight any more than boys do. There is room for both.

Remember the 1985 film Desperately Seeking Susan (directed by Susan Seidelman and starring Rosanna Arquette and Madonna)? I saw that movie when it was new, on a date with a fellow I’d been seeing for a couple of months. The movie upset him terribly. The reason? He thought the movie was a put-down to men because the stars were female.

Say WHAT? It was our last date.

Encouraging girls to be more confident is not a put-down to boys. It’s a means of building a society that looks at what people can do, not what assortment of X and Y chromosomes they have. A lack of confidence opens a roadway to fear and manipulation, regardless of gender. We are all entitled to pursue our dreams, take risks, make mistakes and find our place in the world.