Road Trip with the People Inside 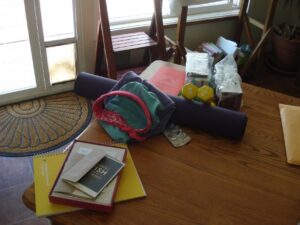 Inevitable with a road trip: packing up the very first bits. . .

Summer is here, and with summer comes the call to travel. Today, Lily, 9 and I embark on a road trip, 400 miles and 8 hours’ worth of driving, from Walla Walla to Port Townsend.

It’s not quite traversing the distance between the two most distant parts of Washington State, but close enough. Port Townsend is where I was born and raised- –

I’ll quibble just a tad here and point out that, though both of you, Lily and 9, have been born, you still have some chronological miles to put behind you until you are raised. I moved east at age forty-seven, so hopefully my “raising” years have concluded.

Town has changed a lot since my time.

It certainly has, Lily. Water Street used to have as many vacant store fronts as occupied ones. It was in your era that tourism really started picking up, and with it people moving in from other places to live the dream of living in a Victorian seaport town.

Port Townsend has diversified its attractions beyond the historic. The arts have really taken off, too, all kinds of performing and visual arts. I think the monthly gallery walk is this Saturday, and Centrum is in the midst of the annual Fiddle Tunes Festival. Lots of people come to town for marine-related activities, too. Recently Port Townsend served as the starting and ending point for R2AK, the race to Ketchikan, Alaska and back, in engineless boats!

We go on the family cruise in July, right?

We sure used to, 9, our family and several others, usually up to the San Juan Islands but sometimes to places like Victoria, B. C. Part of why we’re going to Port Townsend now is because our sister still does that.

Yes, 9, she and her boyfriend.

Great taunting, 9. I figured she’s entitled to both a boyfriend and a cruise, since it’s summer break. Her daughter is traveling now, too, so I’ll be visiting mostly with Mom.

Annie has a daughter?

Yes, 9, a very grown-up person in her thirties.

I always knew Annie would be a teacher. She came home and taught me everything she learned in kindergarten when she was five years old.

Yep, that’s how it turned out, Lily. Her daughter is a teacher, too. And we became what we are because our main skill set is making things up.

Moving right along, road trips require all kinds of preparation. The car has been serviced, its tires have been rotated and its front end aligned (lots of potholes in Walla Walla). Did I also wash the car? Heavens, no, not with 800 miles of dirt and dust in its near future, but I did vacuum and dust the interior and cleaned the inside of the windshield.

Is that why it’s so streaky?

Quiet, 9, but thanks for the reminder that I need to do it again, this time when the sun isn’t beating down on it.

Another major activity is packing. There are roughly four categories: clothes, food, digital devices and entertainment items. Clothes, I hope, are self-explanatory. In Walla Walla our highs are in the 80s right now; in Port Townsend, more like the 60s and some rain in the forecast most days. Jeans instead of shorts. T-shirts instead of tank tops.

Food means perishable stuff, including the snow peas that are at last coming in out in my garden, plus a batch of bran muffins for breakfasts and some dark chocolate and toasted almonds for snacks.

And a gallon of drinking water.

Got ‘em, thanks. Digital devices have multiplied in recent years- -laptop, iPhone, AirPods, plus all their cords and chargers.

Then there’s entertainment. The best part: friends and family will be coming by to visit us! For quieter times I have books, magazines and my yoga mat, plus a couple of notebooks for working on two new books. One is the fifth book in my contemporary fantasy/mythology series. The other is the sequel to a romantic suspense novel, new genre for me. Book one, nearly ready for query to agents and editors, is set in Walla Walla. Book two, as I’ve imagined it, will take place in Port Townsend.

Two days after we get back to Walla Walla we’re performing in the historic cemetery tour. I’ll need to be re-memorizing my script while we’re in Port Townsend, and I thought it would be fun to take my costume and do a dress rehearsal or two for whichever friends and family will sit still for it. 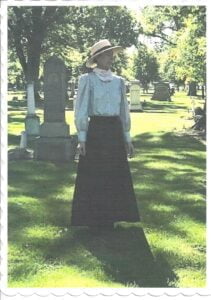 Nellie’s missing her Baker City road trip this year, but she hopes to make up for it in Port Townsend. Photo at Mountain View Cemetery, Walla Walla, WA.

So we get to be entertainment, too. I love that!

Wishing you all safe travels and a happy holiday weekend.