Best-Laid Plans with the People Inside 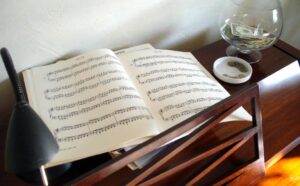 Best-laid plans and the Baldwin Acrosonic! Note the nifty snifter. . .

So many plans have been made during the pandemic, schemes to make the time pass as enjoyably and productively as possible. Lily, 9 and I have started several projects and have managed to stick with a few, some of them to completion! Other plans have modified or fallen by the wayside. Drum roll, please, for our best-laid plans, and what became of them:

Not so hot. We got a couple of chapters into the Spanish workbook and studied astronomy a little bit. But the backyard observations were fun. The conjunction of Jupiter and Saturn was amazing!

We’ve had a bunch of walks in Mountain View cemetery, but since we never take the time to stop and study the artwork on the tombstones it kind of doesn’t count.

One thing that really knocked us off our ambitious feet was the life-threatening blanket of wildfire smoke that covered much of the west in early September, including a week of hazardous air quality here in Walla Walla. It’s hard to imagine now, but we spent at least 5 days indoors with the pet door shuttered and the tiny air gaps at the sliding doors taped shut. I recall the smell (not a happy enough olfactory memory to qualify as “aroma”) of simmering herbs in the rice cooker.

That event temporarily killed my interest in the yard in general, and the ambitious plan to re-do the south bed entirely in blueberries. However. . .

I expect delivery of 2 blueberry bushes and some asparagus starts for that bed sometime between March 29 and April 12. In the meantime, the two dead lilac trees have been removed and 5 yards of compost now amend all the garden beds. The south bed plan has been modified to incorporate the blueberries, as planned; asparagus (another perennial- -yay!) and a section of iris that will be divided and replanted after this year’s blooms fade. I’ll count that a partial success.

Best-Laid Plans, Piano-In November I followed through on the long-held desire to have a piano in the house again. I found a lovely old Baldwin Acrosonic. For several weeks I bumbled around, picking through music books I’ve carried with me since childhood, familiarizing myself with songs I’d liked and ones I’d memorized for the (loathed and dreaded) annual recitals. After a while this activity stopped. I felt guilty every time I passed the piano and couldn’t remember how many days had elapsed since I played it last. One dreary and guilt-filled day in the interval between Christmas and New Year’s we rediscovered the piano Hanon.

Since then we’ve adopted the autopilot practice of working through the book, as prescribed. We’re progressing through exercises 1 through 24, adding a new exercise each week, to be played five times daily. Each of the previous exercises are played once a day.

Plus, we made it more fun, with money!

At the start of each new “exercise” week I put six coins and a dollar bill (this week I didn’t have a bill so I substituted four quarters) in a small dish on top of the piano. On the first six days I drop a coin in the (enormous) brandy snifter tip jar. The seventh day is Dollar Day. Silly, but we haven’t missed a day since monetary reward burst upon the scene. Exercise 11 started yesterday. My technique is definitely strengthening. The exercises are mildly challenging and leave enough space in my head to analyze why my left thumb sometimes struggles with reach, why I tend to choke on an otherwise correct rendition on the last two bars.

What are we going to do with the money when we finish the Hanon?

Good question, 9. We don’t have to rush out and buy another Hanon because we have the Boogie Woogie edition in reserve. What do you think we should do with the money?

Have a celebration at Colville Street Patisserie!

Or buy a cute summer top? A peasant shirt, maybe?

Great ideas! Maybe we can do both if we score a major find at Goodwill.

Many of our best-laid plans were preempted when I got the signal from WolfSinger Publications that Beyond Big-G City was soon to go to press. It was definitely a “drop everything” turn of events and much of it happened between Thanksgiving and Christmas. The book came out in late December but, given the pandemic, I haven’t done much to market it yet. With the new COVID recovery projections I should be able to get an appointment for a vaccine starting May 1. Fingers crossed that we all do our part to realize to goal of spending 4th of July with friends and family. Hopefully I can schedule some in-person book events- -readings, signings and the like- -this summer and fall.

To this end, I was interviewed last week for an upcoming piece (about the new book and my writing in general) by Mike Ferrians of The Waitsburg Times. I will definitely post the link in a future blog when the interview goes to press.

Best-laid plans for the weekend: I’m going out, darn it! Live music and a glass of wine in downtown Walla Walla, outdoors, the forecast for sunshine and 60 F. Still socially distanced, still wearing mask (except while sipping) but getting in some practice for better times to come.

The best-laid plans are yet to come!