Forward with the People Inside 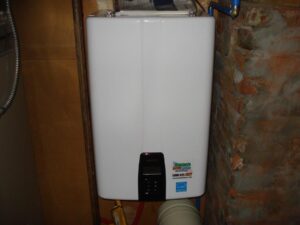 Wow, what a week! On Monday I met with the estimator from my preferred HVAC company for an estimate on a tankless water heater to replace the prehistoric behemoth in the basement that was having- -issues. I accepted the bid later that day. Forward!

On Tuesday, 7 AM (what was I thinking?) I had my teeth cleaned and later that morning learned, though routine annual maintenance on my air conditioning system, that this ancient and venerable contraption might limp along through one more summer- -or not. Also, the compatible refrigerant is, well, I’m not sure if illegal is the right word, but it is definitely on the way out. Forward? This house has eaves that overhang quite a ways; as a result, the house stays relatively cool during the summer. So. Perhaps next year.

Wednesday, in contemplation of the earlier than ever start to wildfire season here in the west, I moved forward in preparation and ordered two home air cleaners. I also attended a luncheon presented by an organization called Blue Zones.

That was extremely interesting.

Locally, the Blue Zones project is sponsored by Adventist Health. The purpose of the project, which is happening in many towns and cities nation-wide, is to improve community health. Each participating locality builds a customized approach to doing this. To get an idea of the activities happening in the Walla Walla area, go here:

My forward trend crested yesterday (I hope) with the installation of the tankless water heater. The cats, in their wisdom, made themselves scarce during this process, one hiding out in the garden shed and the other under the guest bed. I hid in the office and moved forward on a romantic-suspense novel I’m working on, which involved researching nineteenth century American actresses and figuring out how to incorporate an anticipated new thread into the existing plot.

I loved this! We learned about Maude Adams and Lotta Crabtree.

And you took some of each of them and made up your own actress.

I guess you could put it that way, 9.

Speaking of acting, I made a huge step forward this week and bought the fabric for Nellie Gilliam Day’s costume c. 1918. I freely admit I find the idea of sewing, outside of darning socks and stitching up a seasonal assortment of catnip mice, terrifying! Moving bravely forward, I’m meeting with two expert sewing friends next week to get started. Forward, I say! Possibly without tears.

I know what you mean. That sundress I made last year from the 3-piece Simplicity pattern came out pretty lumpy.

I remember that all too well, Lily, but you toughed it out and even modeled it at the Girls’ Club Mothers’ Tea and Fashion Show at Port Townsend Junior High. 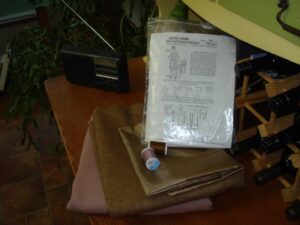 Forward! Soon to make a costume with the help of my friends Diane and Audney. . .

Forward is my favorite direction, especially after two years of an unusual amount of staying put. I might even prefer backward to staying put because at least then I’m going somewhere.

Thanks, 9, I needed that. Next week doesn’t look quite so crazy. Oh, oops, just looked at my calendar and yes it does. I’m looking forward to portraying Matilda Sager Delaney for Living History in mid-May and am putting in daily rehearsal time now to get ready. Right after that a friend that I haven’t seen since the 1980s is coming to Walla Walla for a brief visit and that weekend I might be volunteering to help with the local triathlon.

And, wow, some of those Blue Zones events look intriguing. . .