Healing and the Person Inside 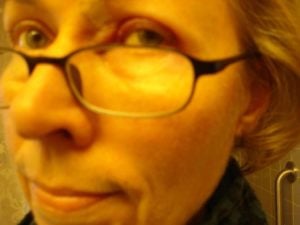 Healing, from Mohs surgery this past Wednesday. The basal cell carcinoma is gone; I’ve been thinking about how to eradicate the extreme and widening division within society, too.

Two days ago Lily (my inner fourteen-year-old) and I reported to Walla Walla Clinic Dermatology for Mohs Micrographic Surgery. Mohs is a treatment for removing skin cancer. I’m happy to report that the basal cell cancer (the non-life threatening variety) was removed 100% from the inner edge of my left eyebrow. The post-surgery pain lasted only a few hours and the wound is healing rapidly.

Part of the healing process is a delightful purple shiner, or, if you prefer, a medium-term but temporary eye shadow I’ve dubbed “Winter Day Purple.” It’s up to me to follow the post-surgery directions (don’t get the bandage wet, no alcohol for 48 hours, no vigorous exercise for a week).

Because it’s in my best interest I’m complying with these directions, while, at the same time, anticipating the lemon drop martini that I will make this evening when the 48 hours have well and truly run. But, being an American, being told to adhere to common sense rankles me. Like everyone on either side of the deeply entrenched 50/50 political divide in this country, I don’t like anyone else telling me what to do.

At least in your case, Lily, you have the excuse of being fourteen. But what about grown-ups who are supposed to know better? Especially American grown-ups in the age of social media?

Is it mere coincidence that I’ve been through a cancer removal the same week that America is imploding on itself (again), throwing verbal acid on our perceived domestic enemies (formerly known as our fellow citizens) because we’re angry about events transpiring in Washington, D. C.? We all seem poised to attack anyone who doesn’t agree with us, with substantial vitriol. The metaphorical cancer is spreading.

I’m going to take a stand here and tell you all something: This way of behaving is wrong.

This is making me nervous. Aren’t you afraid we’re going to be trolled?

Yes I am, Lily, but I’m so saddened and disgusted by the way many decent, caring people that I know, on all sides of the political arguments, are jumping on the bandwagon of Hating The Other. Friends are threatening friends with physical violence because of differences in opinion.

This is the part I don’t get. Opinions aren’t facts, right? I mean, they can be informed by facts, but opinions rely on personal belief, too.

You’re right, Lily, and I don’t get it, either. People have always disagreed, sometimes angrily but it’s much worse now that everyone can hide behind the safety of social media and spout off half-baked ideas that come more from frustration than carefully considered ideology. No one seems interested in stepping back, taking a breath and regaining self-control before responding to breaking news (real or fake) or an inflammatory Facebook post. Sure, we’re all entitled to say our piece, courtesy of the Freedom of Speech guaranteed to all Americans by the First Amendment to the United States Constitution. Here’s the text:

Congress shall make no law respecting an establishment of religion, or prohibiting the free exercise thereof; or abridging the freedom of speech, or of the press; or the right of the people peaceably to assemble, and to petition the Government for a redress of grievances.

Maybe I’m missing something, but I don’t see any directions in the above requiring us to whole-heartedly pursue Freedom of Speech by screaming (or typing) violent, threatening and unfiltered thoughts, right off the tops of our heads, at people whose opinions differ from our own.

Not only are rants and threats not persuasive tools, they build anger and stress that literally makes you sick. You can destroy your own health and shorten your life with this stuff. If you need to blow off steam when you think about current events, take a walk. You’ll live longer, and more happily, too.

So that means we’re going for a walk?

It certainly does, Lily. And behind the social media scene I’m risking some friendships by letting friends (of all political beliefs) who are dashing out to the end of a vitriolic precipice know that I’m concerned about their health and well-being. Why? Because I believe that we need to come to our senses enough to remember that people are people. The political climate in America is horrible right now, and we’re all feeding into the growing divide. We all believe that we are right, but forcing opinions down each other’s throats is not going to heal us. It makes as much sense as rubbing salt into a wound.

So people are supposed to shut their yaps?

Not at all, Lily. But we’re being snared by the rush of digitally pounding our chests, insulting people that we (at least at one time) liked and respected for valid reasons that still exist,  insisting that we and we alone are smart, that we and we alone are right. We are choosing, through our words and actions, to drive the division deeper. I assert that every single one of us is stronger and better than this.

In short, Lily, I’m telling our readers what to do. Some of them will agree with my point of view, others will feel angry and resentful (and perhaps call me an elite or a snowflake, at least in their thoughts). Our fear of being attacked by trolls may become a reality. But I, too, have reached a point where enough is enough. All people are human beings and friends are still friends. It’s time to heel, and heal.