Making Christmas with the Person Inside 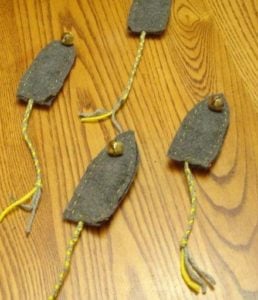 How to make Christmas? For a while I thought I’d forgotten how, but Lily, my inner fourteen-year-old, reminded me of something.

Didn’t you make decorated sugar cookies when you were a kid? And one year you made felt ornaments that matched the cookies?

It sounded like such a good idea a month ago. I even included it on my Advent Bowl list:

How hard could it be? A little felt, some beads and embroidery thread, a little time, a little imagination. Piece. Of. Cake. I’d purchased light blue felt and selected a star cookie cutter for the template in advance. When I drew this item from the Advent Bowl on December 6th I thought No problem. By the end of the day, all I had succeeded in doing was cutting out a dozen star-shaped pieces of felt. The embroidery thread and beads in my sewing basket were the wrong colors for what I had in mind. Disgruntled that I couldn’t complete my task then and there, the next day I stopped by JoAnn Fabric and bought a tube of clear yellow beads, some celestial-themed sequins and blue and yellow embroidery floss. I finally got back to the project Wednesday, December 18. At this writing, I’ve completed three ornaments and have three more to go. 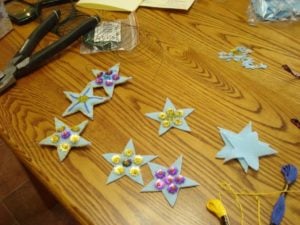 Why was I dragging my feet? It has more to do with my hands, actually, and my eyes. Have you tried to thread a needle recently? Have you noticed they make the eyes of needles a lot smaller these days? And my hands- -they’re good at keyboard stuff and gardening but not so great at handling slippery bits of glass and dainty pieces of foil. My stitches are not as even as they once were.

You figured it out, though. Eventually.

I did, Lily, and I’ll admit I was pleased to remember something I call the “blanket stitch” for sewing up the edges. I also figured out how to make loops to hang the ornaments with from florist’s wire.

And they look, you know, cute in a rustic sort of way.

Thank you, Lily, you are the soul of tact. The cookies to pair with these hard-won ornaments were mixed on Wednesday afternoon and baked Thursday morning, a simple sugar cookie recipe from a vintage (meaning from my childhood) Betty Crocker cookbook. I couldn’t bake them Wednesday night because I was meeting a friend for a 6 PM screening of the Royal Ballet’s 2016 production of “The Nutcracker.” The film was a visual and musical feast, stunning in every aspect, including close-ups of the dancers’ astonishingly expressive faces. My heart was full as I drove home after dark, admiring the Christmas light displays that pepper Walla Walla’s neighborhoods. But, the cookie dough. . . 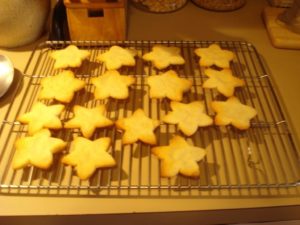 Christmas cookies before decorating. Lily and I made dozens!

The recipe said to chill the dough for 2 to 3 hours. By the time I took it out of the refrigerator the following morning it was impenetrable, the two sticks of butter having set the flour and sugar like concrete. I gave the dough an hour to warm at room temperature, muttering to myself because I was on a short timeline. Some of the cookies would be given that day! They had to bake and cool enough to be iced, then sit a while to allow the icing to set before I boxed them up. When the friend I was meeting for lunch at noon emailed and said she couldn’t make it until 12:30 I did a happy dance. But even with the extra half-hour, I had to expedite the setting of the icing with a hand-held hair dryer. 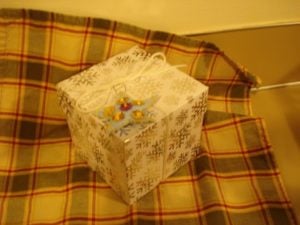 Ta-DA! A finished box of Christmas cookies with matching ornament on top.

Turns out, my friend LOVED the ornament and the cookies, both in concept and in execution. Whew. Same reaction when I gave the second box to my cousin at her open house.

Face it, you did a great job with this.

And I’m pretty sure we baked more cookies than we’ll need for gifts, so . . .

We definitely have enough for today’s gifting plans, enough fudge, too.

The recipe your Dad taught you. That is so cool!

I think so too, Lily. We still have gifts to make for today and next week. This weekend we’ll make another batch each of cookies and fudge, and another loaf of Paleo bread.

That stuff is weird. Interesting, but weird.

The Paleo bread recipe is one Bruce used to make when he was on a low carb diet, a variety of seeds and nuts bound together with eggs, olive oil and an hour in a 320 F oven. It’s gorgeous when sliced, like an aggregate walkway made from all the pretty rocks someone picked up during a lifetime of beach walks. Of my local folks I have one who is supposed to eat very few carbs and another who disdains sweets, so this seemed a good recipe for spreading holiday cheer.

Making Christmas. There was a time when I used to make most of my gifts, ambitious things like hand-knit sweaters and afghans, as well as simpler things like sugar cookies with matching felt ornaments. I often made my own gift cards and wrapping paper designs, was a virtual Martha Stewart before the commercial world knew she existed. Those valiant days are gone, but it’s been, for the most part, a happy return to childhood with the cookie/ornament project. Making Dad’s fudge and Bruce’s Paleo bread lets me spend time with them during this season when they are sorely missed.

So you’re kind of making Christmas for them, too.

Good observation, Lily. And, by the way, I think it will be okay if you snitch a cookie.