Musicians and Other Hoarders 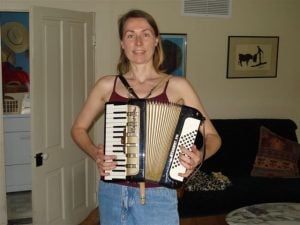 For musicians, that first instrument can lead to. . .well, suffice it to say, I’m still hoarding. . .uh, I mean, collecting.

For many years I worked as a musician. With a childhood education in piano and cello, a knowledge of bass guitar acquired in my twenties and a bit of singing, I held up my half of a music duo for a decade-plus. To the uninitiated, this might sound like a joyful way to pass the time and make a modest living. However, there is a side-effect known to those in the trade. Musicians often become (gasp! shudder!) instrument hoarders.

It starts innocently enough, that first low-end bass guitar purchase when your band friends get tired of lending you theirs. And, of course, a headset for practice sessions so you don’t get thrown out of your apartment for making the building rumble with your Fender Bassman 20 tube amp. This works as long as you’re playing rock and roll, but when you switch to folk and swing that really cool Renaissance RB 4 fretless electric bass with a mellow tone and an acoustic-sounding decay. . .well, you see where it can lead. In between, you’ve purchased an Ibanez acoustic bass guitar that never lived up to the promise of being audible when unplugged. Oh, and the three-quarter size string bass with German bow, then the half-size string bass because you got tired of lugging around the three-quarter. A baritone ukulele is presented as a birthday gift because it’s what you really, truly wanted after hearing another musician play one. The cello you’ve been packing around since you were twelve came out of the closet for a recording session ten years ago and YOU JUST KNOW you’ll get back to playing it regularly. One day. With similar plans, you also have your Dad’s trumpet.

Which brings me to the accordion.

In my younger days I ridiculed accordions and accordion players. The whole concept struck me as way too corny. But after the age of forty, when part of my musical employment involved playing and singing while strolling the grounds of fairs and festivals, the beauty of the instrument became apparent. It’s possible to tote a string bass, set it in place and play in a static position; to play it while walking would require a wheeled apparatus and more physical coordination than I can ever hope to possess. Accordions are strapped on, making them infinitely portable (as long as your back holds out). No amplification is required, usually by request.

I must have discussed my reformed opinion of accordions with Margaret, a photographer I met at a county fair. At the 2008 Washington State Fairs Association Convention she had the student accordion we had discussed (?) in the trunk of her car. For sale. Musicians, are your pulses racing yet?

Well, heck, we’d had a profitable year and my 49th birthday (the first one) was just a week away. The deal was made. I acquired my beloved Hohner student VM 48 bass accordion. It was fun, learning to play with the help of vintage lesson books Margaret had included with the package. The following month, as Christmas neared, I could play Silent Night and have it recognized as such. The Hohner became a regular fixture in our strolling act. Many people we played for had their own accordion stories, and many of the uninitiated wanted to know how the darn thing worked.

It’s not just me, really! I recently learned that an oboist I know owns not one but two English Horns, against the rare event that she’s hired to play one. This information appeared on Facebook; many musicians chimed in to confess their own instrument hoarding tendencies.

In case you were wondering, I haven’t kept every single instrument I’ve ever owned. I sold the three-quarter string bass and donated the half-size to a middle school orchestra class. My first bass guitar, a low-end Washburn, went to a kids’ music program in Waitsburg, WA. I still have the Renaissance RB 4 electric bass. I love that thing. It was my workhorse (it weighs only six pounds, which is a real help when you’re playing four shows a day) and is now in semi-retirement. I also have the Ibanez electric/acoustic bass guitar for a backup, in case I ever again need backing up re: bass. The baritone ukulele grins down from its stand in the music room. The cello, though loved, is mostly in the closet. And the mighty Hohner student VM 48 bass accordion? Every so often I take it from its case, strap it on and whirl through the Roxanna Waltz. Because you just never know, one day my life and livelihood might depend on that very thing.