My Own Big Self

Many years ago, a co-worker was telling a story about her young granddaughter. I don’t remember what the child’s achievement was, but I do remember that she’d said with pride she’d done it her own big self.

Independence is a good thing, especially when there’s no one around to do things for you. This is a concept I understood when I was first away from home. It felt good to be responsible for me and all the maintenance therein. My first year of college, even doing my own laundry was a joy. If something I wanted to wear was dirty, it was up to me to wash it. There’s power in that kind of living.

There are so many ways I’ve connected with my own big self these past several months. When I was part of a couple, I came to rely on Bruce for lots of things, to the degree of taking those things for granted. Like dinner. Many times I’ve stared at the clock in the early evening thinking I know I have to eat something, but what? Some days, it just seems too hard. My own big self gets a touch whiny when I tie on my apron and slog forward. With time, I’ve learned to decide what I’ll have for dinner early in the day, put a plan in place, and pull things out of the freezer if necessary. My own big self has to face it, making dinner is not that hard. I’ve just lost the discipline of doing it.

Anything to do with vehicles was Bruce’s turf and I willingly stayed off it. It seemed like a joke when a recall notice for the Subaru showed up this February (you guessed it: passenger seat airbag). I mean, it’s a 2011. They had plenty of time to figure this out before Bruce died! It took me a month to make the appointment and a month of waiting after that. And, even though we’d bought the car right here in Walla Walla, for recall items the nearest authorized facility is in Pasco, 60 miles away.

Have I mentioned that I hate driving to Pasco? Whine, whine, whine. But two days ago my own big self got there and back again with a pretty short wait in between. Silly as it sounds, doing this chore was a big deal for me. I literally patted myself on the back and said good girl when I got home. Whatever it takes to keep me going. And things are always going.

This week the water in one of the bathroom toilet tanks wouldn’t stop running. When I lifted the lid and looked inside, something about the bent paperclips holding the components together made me think of a Rube Goldberg machine. After jiggling this and that without result, my own big self made an appointment with a plumber. Two days later, I even remembered to turn off the toilet’s water valve to eliminate the thunderous noise of churning toilet tank rapids.

Then the tap water suddenly tasted funny, spiked with a bass note of algae. Not even I thought this was related to the toilet issue, so you see I am making progress. My own big self called the city water quality department to file my report. Turns out they had switched over to a well this Monday that hadn’t been used for a couple of years, a thoroughly tested and properly treated well that is perfectly safe to drink from though it tastes a little off. Check that one off the list.

The gas fireplace was serviced. Two cats went to the vet for rechecks on kidney, thyroid, etc.  Everything is getting done, and there’s a beauty in that. I’m still chugging along on agent queries, manuscript revisions, first drafts of new projects, contest entries, research and the rest of it. Seems like I’m forgetting something. 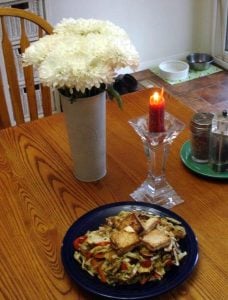