Nellie and the People Inside

In 2018 I volunteered for the Living History program at Fort Walla Walla Museum https://www.fwwm.org/ . I debuted as historical figure Matilda Sager Delaney in May, 2019, and have given her presentation nearly 30 times since then. Being part of the Living History cast is an exciting and fulfilling pursuit that combines many of the things I enjoy most- -historical research, script writing and performing. In the 2022 season I hope to add a new historical personage to my roster, Nellie Gilliam Day.

You’ve already portrayed her in some short projects.

Correct, Lily. Nellie and I started in November 2019, in the role of interviewer for the sesquicentennial celebration of Baker-Boyer Bank. She interviewed Mr. Dorsey Baker and Mr. John Boyer, the bank founders, also Mr. Boyer’s wife, Sarah, who was Dorsey Baker’s sister.

There was the movie thing, too.

Yes, 9, this past August Nellie interviewed Walla Walla pioneer Lettice Millican Clark Reynolds for a video project that will ultimately become part of the exhibit at the Reynolds Cabin in Fort Walla Walla’s Pioneer Village. 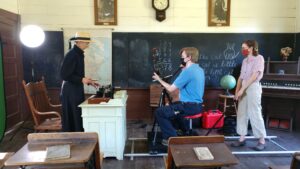 As Nellie Gilliam Day during video shoot: James Temple at the camera, Ella Meyers poised as dolly grip. A narrow slice of a schoolhouse interior was used for the Walla Walla Evening Bulletin office. Video magic! With luck, the final product will be available in 2022.

This October, Nellie and I had a gig at Mountain View Cemetery, a brief personal history as part of a cemetery tour that we delivered at her grave. Today I’m sharing a shortened version of that history, and, afterwards, some exciting news about Nellie!

Ladies and Gentlemen, I give you Ellen Margaret Gilliam Day!

Thank you Susan, but most people call me Nellie.

Father’s family came west in 1844. My grandfather, Colonel Cornelius Gilliam, was the wagon train commander on that journey. Colonel Gilliam, unfortunately, died in 1848. His horse’s picket line become entangled with a gun and he was accidentally shot to death. My father, Washington Smith Gilliam, settled with his family in Dallas, Polk County, Oregon. Mother, Esther Aldrich Taylor, arrived with her family in 1846.

Mother and Father married early in 1854. I arrived November 23, followed by five brothers and sisters. My youngest brother, Marcus, is the grandfather of someone you may recognize, Michelle Gilliam Phillips of a musical group called, oh, what is it now- -the Mothers and the Fathers? Something like that. At any rate, I understand she’s quite famous.

We moved from Oregon in 1859 and homesteaded at Dry Creek, 9 miles east of Walla Walla. Highway 12 now runs alongside the creek. We farmed of course, everyone did in those days. Father was also involved in politics, as a member of the Washington Territorial Legislature in 1861 and Sheriff of Walla Walla County in 1863.

We lived in Walla Walla when father was sheriff but most of the time we lived at Dry Creek and that was where I first taught school. Teaching in those days was difficult at best and I felt ill-prepared for the work. Professor Lyman of Whitman College recommended I work toward a teacher’s certification at a well-regarded Normal School in Salem, Massachusetts. My parents weren’t happy that I was so far from home, but it was a glorious experience, not only the education, which was superb, but the cultural exposure. I saw many historic sights, attended top-rate performances including Edwin Booth as Hamlet, and heard lectures by notable people of the day including Oscar Wilde!

In 1882 I graduated from Salem Normal and returned to Walla Walla, where I was offered a position in the academic department of Whitman College. I enjoyed my work at Whitman tremendously and stayed there for three years, at which time I decided to run for Walla Walla County School Superintendent. My opponent was the incumbent, Mr. J. H. Morgan. The election was in November, 1886. At that time women could vote in Washington State, a right that, unfortunately, was rescinded the following year. I am happy to report I beat my opponent, 1,686 votes to 1,557. You may think female voters put me over the top but this was not so. Very few women, in fact, turned out to vote.

Jesse was the founder of Dayton, Washington, which was platted on a homestead he bought in 1864. He saw great promise for the future town and encouraged the building of a flour mill, which attracted more investment to help the city grow. Sadly, Jesse died a few years after we married. We were living in Dayton at that time. He is buried there, in the Pioneer Memorial Cemetery, with his first wife.

I returned to Walla Walla. My home there was close to Whitman College, on East Main Street. 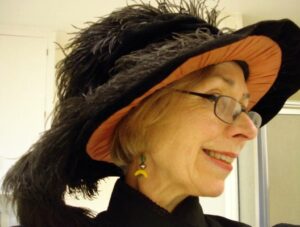 Nellie needs an update! A truly hideous hat, courtesy of the Fort Walla Walla Museum collection, for the Baker-Boyer piece set in 1911.

Eventually I found my way to a career in journalism. The Walla Walla Evening Bulletin advertised some staff vacancies in 1906. I applied, and to the surprise of everyone, including myself, became their first female employee. I advanced from proof reader to society editor and wrote many pieces for the local “Up-to-the-Times Magazine”. The newspaper itself experienced many mergers and changes in name. It is now called the Walla Walla Union Bulletin.

I look forward to learning more about Nellie and developing a full presentation of her life. Already, she’s caught the public’s attention. I am happy to report that funds for six new interpretive plaques have been donated to Mountain View Cemetery, and one of them is designated for Nellie!

Like everyone else on this earth I sometimes fall into a funk, feeling like my life is pointless and that I really don’t add much to the world. But I feel honored, and humbled, that my work in bringing Nellie to life has put her story back into public awareness.

Most recently I’ve portrayed her in 1906, the year she started at the Walla Walla Evening Bulletin. My hope is to expand that portrayal to 1918, so more of her life and Walla Walla’s history can be shared. Plus, she was in her mid-60s at that time, where I’ll be soon. I look forward to her updated 1918 “look,” no more ankle-length skirts or high-necked blouses or straw boater hats.

Besides, Matilda gets grumpy when Nellie borrows her clothes. . .