Presentation and the People Inside

Lately, my life seems to be full of presentations. Some are by friends of mine (I’m a regular audience member at Fort Walla Walla Museum’s Living History program); other times, I’ve been the presenter. I’ve recently made a classroom appearance as a time traveler from 1906, and made a case for settling in Walla Walla as Nellie Gilliam Day c. 1918 in the Living History end-of-season show last Sunday. Tomorrow is (as far as I know) my last presentation for 2022, a program called “Myth-Taken Identities: Using the Greek Pantheon in Fiction.”

Haven’t you been working on that for, like, a million years?

It’s definitely been on my calendar for more than a year, 9. Last fall I was contacted by the Walla Walla County Rural Library District, which is celebrating its fiftieth anniversary this year. They’ve sponsored a year-long program of presenters, one or more speakers per month, at various rural libraries around the county. Mine is the last program on the roster. They’ve had everything from field scientists to basket weavers to people in the hockey industry. A lot of authors, too, in both fiction and non-fiction. Most of the authors live in the county or did in years past. They also hosted an event with widely acclaimed suspense novelist J. A. Jance.

That’s the way I see it, Lily, and I’ve attended several of the other presentations, mostly to learn but also to see how other presenters do what they do. Some have highly visual PowerPoint presentations. The basket maker brought a table full of different basket styles and incorporated a demonstration into her talk that covered the history of the art, traditional materials and lots of other interesting things.

So what will you do?

Talk, mostly, and I have some props to add humor and break things up visually. I’m also bringing a few giveaways, and copies of my fantasy/mythology “G” series will be available for sale.

What will you wear?

I’ve decided to go festive with a head wreath and my promotional Beyond Big-G City apron. That way, whether I opt for a skirt and blouse or jeans and a turtleneck, I’ll look like I’m part of something that’s not quite every day.

Loading in for even a simple event requires thought and planning. I’ll be reading from a (well-rehearsed) script and out of my books, and have been practicing with my script and props placed on a music stand. At the venue (Touchet Fire Hall, Touchet, WA) they will provide a podium, also two rectangular tables that I requested for the rest of my stuff. 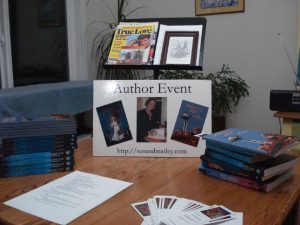 It takes a mountain of stuff to make a presentation. . .

Signage, book inventory, printed handouts, book marks, a big stack of complimentary “Nevada Slim & Cimarron Sue” music CDs (it’s a personae many people in the county remember and miss), and props. I’ll arrive by 11:30 A with half an hour to set up and get acquainted.

I’m very, very grateful to have a book event. The last one was in June 2021, a book signing for Beyond Big-G City. Hopefully I’ll do more events next year, when the fourth in my fantasy/mythology series, Crisis in Big-G City, is scheduled for release. Book signings and/or readings, whether at a public venue, for a club, or hosted by someone in their home, are a part of marketing I really enjoy.

That, and over 1,800 performances as Nevada Slim & Cimarron Sue.

Most of my life I’ve been a writer and a performer, but twenty-five years ago I hadn’t imagined I’d be doing cool things like library talks. If you are a Baby Boomer (or even a Gen-X whippersnapper) and feel like you’ll never get to do anything interesting in life, take heart. I started as a musical entertainer at age forty and my first book came out when I was fifty-five.

And now you’re how old?

Old enough to have hidden under a table when I’d had Too Much Birthday, November 1, 1963. I had just turned four: you do the math. 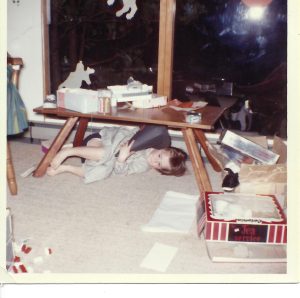 Protest or presentation? Too much birthday, November 1, 1963.

Happy Days to us all, and, if you’re in Walla Walla County this Saturday, I hope to see you at the Touchet Fire Hall!