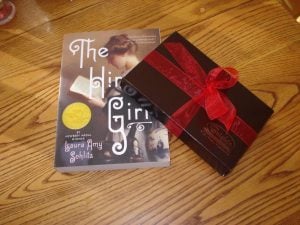 Is it books? Is it chocolates? Whatever it is, it’s Pure Vice.

Ever have one of those days when you wake up resolved to do everything you’re supposed to do and then, sometime in the morning after two cups of coffee, a workout, breakfast and various social media chores, you find yourself saying, “Nah. I don’t wanna.”? Yesterday was such a day for me, the day I entered the world of Pure Vice.

Is Pure Vice an oxymoron? Perhaps, if you’re not being too picky. For me, Pure Vice translates into one thing in particular: jigsaw puzzles. 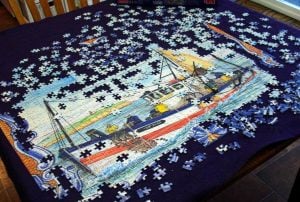 Actually, this particular puzzle is also part of the grieving process. Bruce gave it to me on Christmas Day, 2017, and I hadn’t worked it yet.

The Pure Vice inclination started incubating Sunday morning, when I decided to go through Bruce’s work and casual clothes, throw out the truly threadbare items and wash the rest to donate to the local homeless shelter. When I got to the last pair of jeans he’d worn and cleaned out the pockets. . .

As I’ve said in prior posts, it’s the little things that get to me. His dad’s yellow marble, one foam earplug, a guitar pick, pocket change, pocket knife, pen. No, no, no, I said on the inside, this is not right, this should not be a permanent thing! But it is a permanent thing. I know this intellectually; on Sunday it came through loud and clear emotionally as well.

I took out the puzzle that afternoon, making rules for myself such as “only after you’ve done your day’s work.” And I was pretty good about that until yesterday. I read an article about not always following the rules in a back-issue of Poet’s & Writers magazine Thursday morning and took it for a karmic “pass.”

Even so, I can’t handle a 100% Pure Vice day. No one else in my family suffers from this, so I’m assuming I possess a rogue killjoy gene. So I did a little work, too. I finished the first draft of my Living History presentation, set to debut May 12, 2019 at Fort Walla Walla Museum. There I’ll portray Matilda Sager Delaney, a survivor of the Whitman Massacre (1847). Matilda’s life was much harder than mine (so far) but she, at least, had enough fun to be referred to as an imp. I’m sure she would approve of the puzzle, and would also urge me to eat the cinnamon roll as big as my head that I’ve been saving in the freezer against hard times. 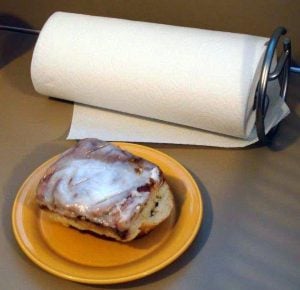 Blame it on grief, blame it on Poets & Writers magazine, blame it on Matilda; some days I get sick and tired of doing what I’m supposed to do. I’ll bet you do, too. So go on- -work the jigsaw puzzle, eat the cinnamon roll. It will do your heart good.