There be Vikings (in the Mirror) 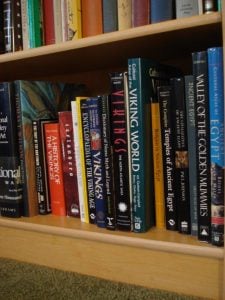 Sometimes I’m tempted to have a DNA test. You see, I’m a skeptical person, the sort who wonders if family stories passed down through the generations are true.

For example, one of my great-grandmothers claimed she was part Cherokee. I tried to verify this when I was doing genealogical research for (you guessed it) a book I was working on. Though I learned the great-grandmother in question was related to John Adams, John Quincy Adams and Buffalo Bill Cody, there was no sign of Native American ancestry. According to one of great-grandma’s daughters “Mom was full of crap” about this particular assertion.

Fast forward to 2018. Make that last week, 2018. I don’t know what brought ancestry to mind – -possibly ruminations about my approaching birthday- -but I was thinking about all the Irish, Scottish, Swedish, English and German folks I am said to be descended from. The insight came like a flash. What am I, really? I’m 100% Viking.

According to Wikipedia, Vikings were “Norse seafarers. . .who raided and traded from their Northern European homelands across wide areas of northern, central, eastern and western Europe, during the late 8th to late 11th centuries.”

Raided and traded. Wikipedia makes it sound like poetry instead of a brutal romp and stomp over as much of the planet as contemporary sailing and navigational technology allowed. Northern Europe is the universal homeland of my ancestors. Vikings would certainly have introduced themselves to my 8th through 11th century kin. (I use “introduced” euphemistically.)

Other indicators of my recently surmised Viking ancestry:

I love amber jewelry, one of their top trade goods

I own half a shelf of Viking reference books

The books were purchased for a writing project (of course), something I was working on about 20 years ago. Full disclosure: it was a time travel romance. I was going through some sort of aging crisis, I guess, because a story about a 37-year-old woman who could travel back in time and be mistaken for a teenager truly resonated with me. I mean, hey, my heroine still had all her teeth! This would have been a big deal in the late 8th to late 11th centuries.

Viking raiders are on record as being a brutal lot, but they did have some good ideas. Like leaving the women in charge of everything while they were gone. And accepting any children born to their wives as their own, even if they were gone for a few years. They were brilliant ship-builders and navigators in their day. They had engaging and colorful mythology.

When the 2020 census comes around, I’m going to let the Census Bureau know: